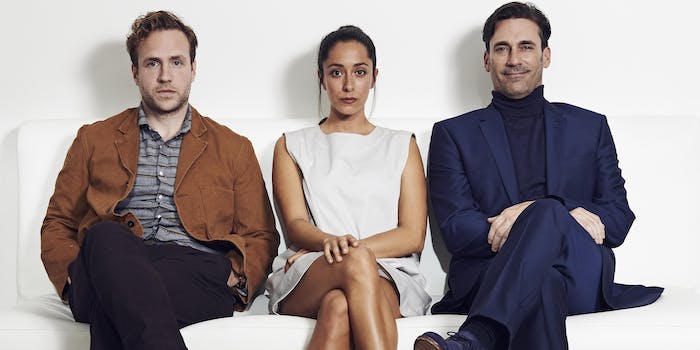 The ‘Black Mirror’ holiday special is a dystopian Christmas nightmare

This may be the best science fiction TV of the year.

Dystopian sci-fi satire Black Mirror is the last show you’d expect to have a Christmas special, but by some miracle of British TV programming, White Christmas actually happened.

As a palate-cleanser before the bloated seasonal cheer of Doctor Who and Downton Abbey, White Christmas, which debuted last night on Channel 4, delves back into Black Mirror‘s characteristically bleak look at the world. In keeping with 2014’s overarching theme of everything being terrible, the 90-minute episode builds up to a crescendo of horror. And honestly, it’s perfect.

Black Mirror is frequently compared to The Twilight Zone, with each self-contained episode examining some disturbing aspect of near-future technology. One week it’s a scenario where an entire society is ruled by reality TV; the next, a tale about recreating a facsimile of a dead lover based on their social media profiles. In a landscape dominated by high-octane space operas and X-Files ripoffs, Black Mirror is a rare example of truly original science fiction that plays to a mass audience.

Moving on from Black Mirror‘s previous explorations of social media culture, White Christmas introduces the idea of a real-life “blocking” function—and a pair of male protagonists lifted straight from the pages of a men’s rights forum. One is a sleazily charming pickup artist (Hamm, a perfect casting choice) who uses a Google Glass-like technology to help dweebs get laid, while the other is a miserable guy (Spall) who has been “blocked” by his pregnant girlfriend, meaning they can only see each other as buzzing outlines of television static.

Black Mirror is the work of British TV presenter and writer Charlie Brooker, who is known for his bitingly grim brand of social satire. From his pop-culture criticism to his writing on shows like Nathan Barley (a mid-2000s satire on hipster startups) and Dead Set (a zombie horror series set in the Big Brother house), the overarching theme of his work is a morbid fascination with the dark side of popular media.

Even if you’re not aware of the creepy underbelly of the men’s rights movement, it’s easy to see where Brooker is coming from with the characters played by Spall and Hamm. For one thing, there’s the fact that they both get “blocked” by their spouses. There isn’t much of a leap between this and the growing demand for more effective blocking functions on sites like Twitter —a demand driven by women who are being harassed and stalked online. The idea of being blocked will be horrifying to some, but might seem very appealing to those who have experienced persistent harassment.

The sci-fi conceit of Oona Chaplin’s storyline is similarly far beyond the reaches of modern technology, but works well as a critique of how we respond to innovation. If a new product makes your life easier, then why bother thinking about what goes on behind the scenes? It’s a new riff on a familiar idea (this time Soylent Green is your electronic PA), but illustrated in a way that becomes downright terrifying.

Black Mirror is often described as technophobic, but that’s not really accurate. Rather than being a grim warning about the dangers of technology, it’s more of a fictionalized spin on what’s already happening in real life.

Brooker is hardly a technophobe. He’s critical of superficial pop culture and the dangers of social media, but always from the perspective of being a consumer and creator of the very thing that fuels his anger. His writing in Black Mirror is effective because he’s right in the middle of it all, not because he’s some kind of luddite outsider. Unlike the saccharine sentimentality of most holiday specials, White Christmas is all too real.