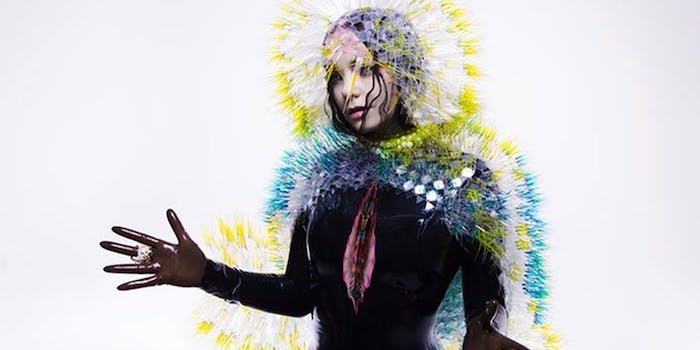 It's her "complete heartbreak album."

Last we heard from Björk, she was a featured guest on Death Grips’s surprise release. Today, the singer went ahead and followed suit, releasing her new album Vulnicura two months early.

The nine-song album—a followup to 2011’s Biophilia—was initially scheduled for March, and Björk even tweeted as much on Jan. 13. After a leak of the album appeared on the Internet over the weekend, Vulnicura will now roll out on iTunes over the next 24 hours. The vinyl and CD versions will still be released in March.

Björk posted to her official Facebook page today, explaining that Vulnicura is a “complete heartbreak album:”

kinda surprised how thoroughly i had documented this in pretty much accurate emotional chronology …. like 3 songs before a break up and three after . so the anthropologist in me sneaked in and i decided to share them as such . first i was worried it would be too self indulgent but then i felt it might make it even more universal . and hopefully the songs could be a help , a crutch to others and prove how biological this process is : the wound and the healing of the wound . psychologically and physically . it has a stubborn clock attached to it.

As Madonna recently discovered, a leaked album can throw a monkey wrench into a well-planned released schedule. But Björk’s always been a proponent of technology and embraced what it means for music. The best way to beat a shitty rip floating around the Internet? Give the people what they want.