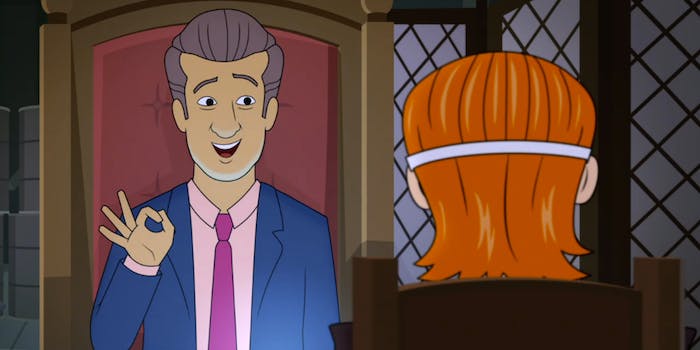 The Gayfather has a few tricks up his sleeve.

This week’s episode of Seth Meyers‘ Hulu series The Awesomes features a star-studded guest roster playing a group of super-villains called the Gay Mafia—and they’ve got a scheme a-brewing.

Like any good mafia, the characters played by Billy Eichner (Billy on the Street, Difficult People), John Roberts (Bob’s Burgers), and Chris Kelly (Saturday Night Live) have a front: a lucrative furniture-distressing business. But in their secret basement lab, they’re developing a coming-out serum to dump into the town’s water supply for Pride Week.

The hitch? The Gayfather (voiced by Eichner) needs superhero Frantic (SNL’s Taran Killam) to help them contaminate the water.

Will he do it? You’ll have to watch and find out.

The Awesomes, which is in its third season on Hulu, features an all-star lineup of voice actors, including Rashida Jones, Kenan Thompson, Paula Pell, and Ike Barinholtz.