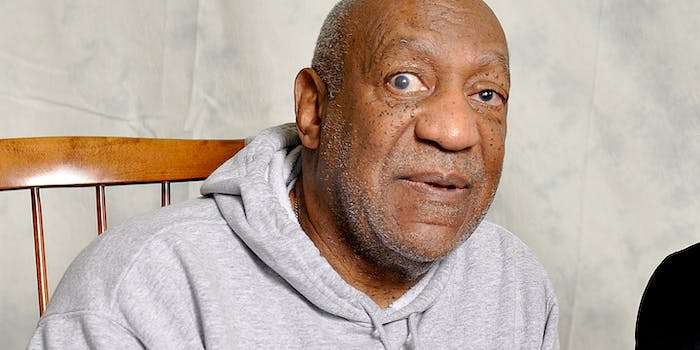 The World Affairs Council of Philadelphia/Flickr (CC BY 2.0)

Cosby is reportedly spending six figures on unearthing information to "discredit" his accusers.

Another day, another stomach-turning detail in the Bill Cosby saga.

The comedian has allegedly hired a team of private investigators to “dig up dirt” on the private lives of his accusers, the New York Post reports. Cosby is reportedly paying the investigators six figures to unearth any salacious details in his rape accusers’ pasts, and is looking for information that might discredit them.

Over the past few months, more than two dozen women have come forward with allegations that Cosby drugged and sexually assaulted them. Now, sources close to Cosby, including an “insider” quoted by the New York Post, claim that Cosby’s private investigation firm to dig into the pasts of his accusers, including former model Beverly Johnson and Katherine McKee, an ex-girlfriend of Sammy Davis, Jr. who claims Cosby raped her in the 1970s.

“If you’re going to say to the world that I did this to you, then the world needs to know, ‘What kind of person are you? Who is this person that’s saying it?’” Cosby reportedly told his legal team, according to the “insider.”

The source also reports that Cosby specifically referenced Johnson, who alleges that Cosby spiked her coffee before attempting to sexually assault her: “You can’t say that I put something in your coffee, threw you in a cab and then you go on and live a high-profile life, a famous life, and you never complain. You mean you never reported it to the police? You never tell anyone?” he reportedly said.

Because the “multiple sources” in the New York Post article are not identified, it’s best to err on the side of caution and take all of this with a grain of salt. (Though it’s certainly not surprising that a man as powerful and reportedly as arrogant as Cosby would think it was a good idea to do damage control by smearing the reputations of his accusers.)

(If you Google “Beverly Johnson,” by the way, the first hit that comes up is a website for her hair extension brand. Other than that, pretty much every search result is related to her allegations against Cosby.)

Up to this point, Cosby has stayed relatively quiet, refusing to answer reporters’ questions and becoming enraged when the topic is brought up in interviews. So far, the 77-year-old comedian has only commented to the New York Post, telling reporter Stacy Brown that he expects predominantly African-American publications and journalists “to uphold the standards of excellence in journalism” and have a “neutral mind.”

Cosby’s wife, Camille, also recently commented on the allegations, comparing the media’s treatment of her husband to Rolling Stone’s shoddy reporting on the University of Virginia rape story. “No one will ever want to be in the position of attacking a victim. But the question should be asked—who is the victim?” she wrote in her statement.