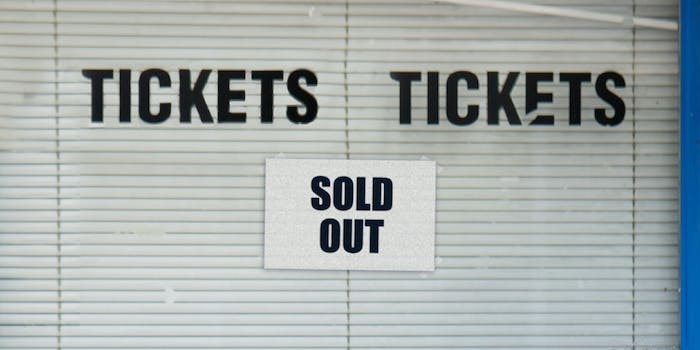 Fans of the punk band were at the mercy of the Live Nation/AXS stranglehold.

On Friday, tickets for Bikini Kill reunion shows in New York and Los Angeles went on sale, but any excitement fans had over this historic event quickly evaporated as bots and scalpers apparently snatched up a majority of tickets.

Earlier this week, Bikini Kill, the punk band that formed in 1990 in Olympia, Washington, and which would come to inform the feminist riot grrrl movement of the early ’90s, announced a small spring reunion tour. Fans of a certain age hovered over their phones and laptops. But on Friday morning, as two NYC shows went on sale, then an L.A. show, there was a rumbling on Twitter. A lot of people couldn’t get tickets, even seconds after they went on sale. The responses to this Bowery Presents tweet echoed the frustration of having to buy tickets online in the era of scammers and bots.

Of course, also here – bots and scalpers get them all and offer 8(!!!) tickets 4 minutes after the sale started(the tickets were gone a minute after) pic.twitter.com/nwjoVltTxv

also within the last five minutes the secondary market prices for Bikini Kill have gone up from an average of $300 to as much as NINE HUNDRED FUCKING DOLLARS pic.twitter.com/sGTB8tMXbv

Robots that weren't even built in the '90s are getting those Bikini Kill tickets.

Quickly, tickets started popping up at double and triple the price on sites like StubHub (with one price even quoted at $949), which led many to wonder why the band went through corporate channels like AXS and Live Nation (which merged with Ticketmaster in 2010). I tried for tickets right at noon CT via Live Nation with no luck; when I checked back 30 minutes later out of curiosity, a new screen popped up to inform me it was for security purposes and was monitoring suspicious activity.

Much of the frustration around this mess was also tied to Bikini Kill’s identity: Their music is feminist, pro-LGBTQ, anti-capitalism. In a 1991 manifesto published in the Bikini Kill #2 zine, singer Kathleen Hanna wrote of a need to “seek to create a revolution in our own lives every single day by envisioning and creating alternatives to the bullshit Christian capitalist way of doing things.”

Bikini Kill tickets selling out in 1 second and then going for $379.05+ on StubHub is the least riot grrrl thing to ever happen

In September, after Bikini Kill’s catalog was finally released on streaming sites, Hanna was interviewed by Tidal and asked about the evolution of feminism. She mused, “I just think that capitalism really fucks everything up and that one of the really big problems is that everyone is trying to start a Twitter fight with someone more famous than them so that they can get more Twitter followers.”

It does have a way of fucking things up, and many pointed out the irony of the pre-sale opportunity for American Express holders earlier this week being way less stressful.

According to my twitter feed Bikini Kill will be performing for an audience of VPs of Marketing that paid $800 for a GA ticket, which honestly sounds exactly right.

Of course, there was also a call for boys to be cool for once in their lives and let the girls to the front.

Many bands who tour more regularly than Bikini Kill have had to figure out ways to circumvent platforms like AXS and Live Nation. My Morning Jacket recently started taking a closer look at sales to fish out scalpers. Bikini Kill isn’t the only band this has happened to, of course: Fans of Aphex Twin were having a similarly terrible time trying to get tickets to his NYC show on Friday.

My Morning Jacket voided ticket orders that were clearly scalpers — and re-released those tickets to fans. Amazing. from phish

But the live music ticketing landscape is still dominated by just a few companies, with Live Nation on top of the heap. Last year, the Government Accountability Office released a report on Live Nation’s practices and found they have scams essentially built into their pricing model, many in the form of fees.

A second Bikini Kill show was added on Friday afternoon, though it’s still through Live Nation. We’ve reached out to the band for comment.