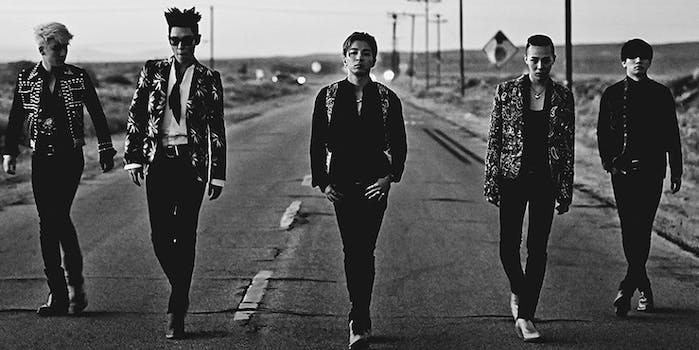 And the timing couldn't be better.

Big Bang may be heading off the radar later this year, but beforehand the K-pop stars are celebrating their 10-year anniversary in a huge way: with a big-screen debut.

Big Bang’s label, YG Entertainment, premiered a trailer early Wednesday morning for Made: The Movie, which is based on the band’s last album. It looks like a peek into the making of the Made project, as well as a lot of the boys goofing off (and for the fangirls, G-Dragon dancing naked behind a towel).

There’s an official poster too, which ought to leave fans salivating.

The timing on the film is good, as the members of Big Bang have yet to serve their time in the military as required by Korean law (two years). According to a report from Korean website Naver, T.O.P. will be the first of the group to go as he is the eldest.

The other members’ enlistments will be staggered as well, so none will go at the same time. While T.O.P. serves his time, G-Dragon and Taeyang will be at work on solo projects that are due to release next year.

The movie will hit Korean theaters on June 30 and is produced by YG Entertainment CEO Yang Hyun Suk. While there’s no word on a U.S. release yet, YG has ramped up its attention to international fans in the past few years, so there’s hope. Now if YG would just give us all of Made on one album, we’d be really happy.