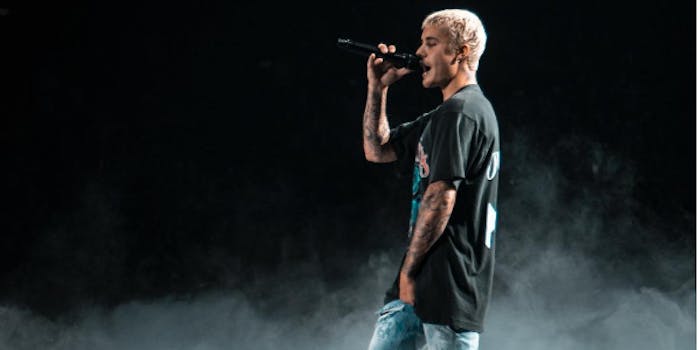 Only vanilla-scented air freshener, 10 luxury sedans, and something called an 'Indian Yoga Casket' will suffice for the Biebs.

Justin Bieber’s rider for his Purpose tour in India was leaked on Thursday, and the list is… extensive.

Many artists have been known for wild backstage demands, such as Beyoncé and Kanye West. Queen Bey’s rider asks that her dressing rooms be kept at 72 degrees, and be provided with “heavily seasoned” chicken legs and rose-scented candles. Kanye West, meanwhile, asks for a barber’s chair and a Coke and Hennessy slushy machine.

Bieber is no exception. In the leaked press release, he demands 10 luxury sedans, two buses for his entourage, a Rolls Royce, a private jet and helicopter to fly into the stadium, his own washing machine, redesigned hotel suites to his liking, a “special Indian Yoga Casket,” a masseuse flown in from Kerala, India, “cans of wild berries and vanilla room fresheners,” Dove body wash and lip balm, and the list goes on for hundreds more words.

Justin Bieber’s India tour rider includes a “Indian Yoga casket”, a jacuzzi and a press release that lists all his demands out for you. pic.twitter.com/afwHpMJHJM

Some of the requested items are beyond excessive. Could Bieber truly be this much of a diva, or is he merely keeping venues in check? Celebrities often use riders as a way of holding venues to an extremely high standard. If the venue cannot hold up its promise to meet demands, the artist has the right to back out at any time, often with a partial or even full payment.

Live shows tend to be more dangerous than audiences realize, so some entertainers opt to protect themselves with overly specific demands. Attention to detail will reflect the venue’s attention to greater security demands. Or, maybe, Bieber just really loves the scent of vanilla.