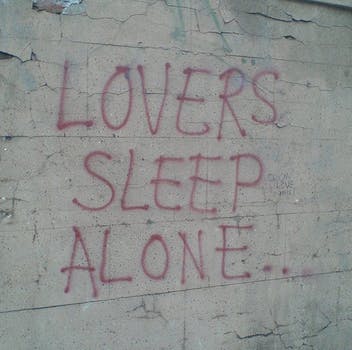 To sleep, perchance to dream—alone

Think it's great to go solo? Think everyone should be happily coupled? Weigh in on Twitter.

True fact: romance is great, as are the existence of happy couples and stable relationships and Finding Your Soul Mate and all that. Still, sometimes it seems like the whole world (by which we mean, headlines on mainstream websites, plus those magazine covers you can’t help seeing in grocery store checkout lines) ignores the equally true facts that personal happiness does not require being half of a couple, and being single has advantages all its own.

Those last two facts are tacitly acknowledged on Twitter, where the hashtag #BestThingAboutBeingSingle started trending Thursday morning (with hundreds of new tweets every hour by that afternoon).

Janis Joplin once sang “Freedom’s just another word for nothing left to lose,” but many
Twitterers named “freedom” the best thing about being single.

Though many liked the freedom singlehood brings,  others acknowledged the downside, including those who re-tweeted a two-hashtagged message citing the “best” and “worst” thing about being single: the best is “the freedom,” while the worst is “going to sleep alone.”

Some Twitterers, however, saw the upside in solo sleeping: “[N]ot having to listen to somebody snore errrynite” Like wise, one pointed out that sleeping alone meaning one gets to “Snore as much as you want” or “sleep like a star fish, drool, snore, and not care at all!!”

Being in a relationship requires a certain level of “other-ness,” the requirement that you must think of the other person instead of just yourself. Singletons don’t have to bother, and some consider this singlehood’s most attractive feature: there’s “no one stressing you about what you can and cannot do” and “Freedom To Talk To Whoever , Whenever , Wherever. Just DOING YOU”.

Of course, some of the tweets about being single could just as easily be labeled the best thing about being in a relationship that’s sane and healthy, as opposed to a dysfunctional pairing with some disturbing control freak or emotionally needy co-dependent type: “No one bugging you every 10 mins about where you at, what you doing, etc”

Other tweets took more of a no-risk, no-failure approach to romance: From that perspective, the best thing about single status is “[O]bviously, no cry, no dying, no depress, no heartbroken, no sad feelings, just happy thoughts.” Or, to put it more succinctly: if you’re single
“you don’t have to worry about your heart being broken !”

Other happy singles don’t plan to remain so forever; they just find singlehood the best for them now, and must tend to other things first before settling down with anyone. A Twitterer who goes by “Some random teen” likes being single because “You dn’t have to wrry abt that person and therefore you can concentrate on other better things including studies”

Being single gives others the chance to prepare for eventual non-singlehood, “becoming the person God made you to be, so you have something to offer the right person.”

Of course, a generous handful of the tweets actually displayed sad sarcasm: where single status is concerned, pretty much everyone agrees “crying myself to sleep at night” is a bug, not a feature.

And a few cynics took that thought a step further, doubting anyone who claims singlehood is all that great: “But why is #BestThingAboutBeingSingle trending ? Most of you guys are always crying about being lonely half the time anyway!

Photo by a adamant