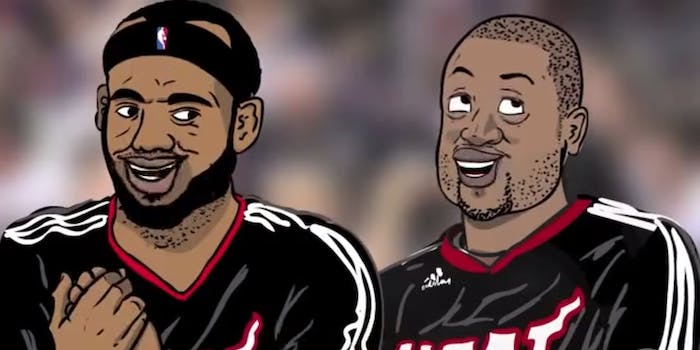 Go into sports-loving overtime with these 6 webseries

Fill the frightening void when no one, anywhere, is playing anything.

Sports are the best. You may not agree with this, but you’d be wrong. What else gets us out of bed in the morning raring to take on the day or sends us to slumber at night with hope in our hearts? Money? Family? Surely not!

But what to do in the few minutes of the day when no one, anywhere, is playing anything?

Here are six sports webseries to fill that frightening void.

So why not bypass those corybantic flapping heads and opt for Lil Wayne—a man barely awake, let alone aggressively opinionated?

Sure, Weezy’s production values are surprisingly sloppy for one of the world’s most popular recording artists—and his constant reference to notes makes you wonder if maybe he didn’t actually recall his eight months on Rikers—but the guy has Chris Paul on speed dial. That unfettered access to the source material is reason enough to tune in.

Speaking of Chris Paul, he’s actually quite humorous. Especially when he has teammate Blake Griffin by his side and jokes by Neal Brennan (Chappelle’s Show) to work with.

The title alone of BGCP3TV announces that it’s going to be great, and close inspection reveals that going off the strength of player nicknames is a solid enough maxim as any to follow when sorting through the clutter of NBA-related webseries.

So, it’s no surprise that the “Greek Freak” has a decent thing going, in contrast to LeBron’s animated family series—which King James mistakenly calls “very funny.” And Chris “Caveman” Kaman’s Exploring Kaman? About as average as his obvious moniker.

Following on this logic, it’s obvious who we think would be great: Step forward, Warriors big man David Lee—aka Da White Howard. May we suggest a educational series on the ownership and maintenance of pine furniture.

An obvious exception aside, boxers aren’t renowned for their eloquence. They tend to possess other, more damaging, implements with which to make their intentions clear. And that’s something that can be an obstacle for documentary makers; there’s only so much heavy bag work and skipping that a layman can watch.

But HBO’s Ring Life avoids much of this by spending a lot of time out of the gym and talking to the people—trainers, family, friends—who support the fighters. And it’s really out of those interviewees, rather than from the boxers themselves, that we find out just why they punish their bodies like they do. The reasons, money aside, are refreshing primal—tellingly consistent with amateur boxing series such as White Collar Brawler—and a reminder that perhaps we aren’t as isolated from our surroundings and forebears as we may now arrogantly think.

You may well have seen the original, American series of Replay—Gatorade’s fun re-enactment of a tied high school football game, 15 years after the fact—but this is the Australian version, the Old Collegians Warriors trying to redress their dramatic collapse against the Merrivale Tigers in their 1991 Grand Final.

You may be unfamiliar with the sport—Australian Rules Football, a rabble of a game played on a field the size of a small country—but the ingredients that made the original edition so satisfying are retained here: fat, has-been but still competitive athletes and small town charm. It’s the sort of thing that makes you feel reassured about your own future: No matter how bad your knees get or how great your paunch, you’ll still possess some sort of drive and determination.

Plus it features the world’s most Australian-sounding person ever, Dave Hughes.

There was no real reason to include Bad Lip Reading on this list. It’s great, sure, but everyone’s seen it. And the reason that series is so fun—a fictionalized lifting the veil of our favorite athletes’ quirks and utterances—is replicated in Yahoo’s Sports Friends.

The series likes to imagine some of American sports’ foremost relationships, e.g., Jordy Nelson and Aaron Rodgers, Lebron James and Dwyane Wade, Ryan Braun and Prince Fielder. And while Sports Friends overplays its major trope, the heightening of the brawny athletes’ effeminacy, any series featuring the awkward moment when Michael Vick wants to play with your puppy exhibits a comic sensibility in the right place.

If you were broken up when Jane Fonda split with Ted Turner—“but they were having such great, frequent sex!”—then you’ll be relieved to find that she has a new beau, Richard Perry, so that she can recommence her fulfilling, uninhibited lovemaking. And continue to tell everyone about it.

But that isn’t the only reason that she has been too busy to marry the “cadaverously thin” Perry. In the past few years, she has also been making new fitness videos and releasing them on YouTube.

The new workouts are noticeably less energetic then her previous, more famous routines—this one seems to be mostly walking on the spot at the leisurely pace of “one mile in 18 minutes”—but give her a break. Fonda’s now 77, and this isn’t exactly the only exercise she’s getting.