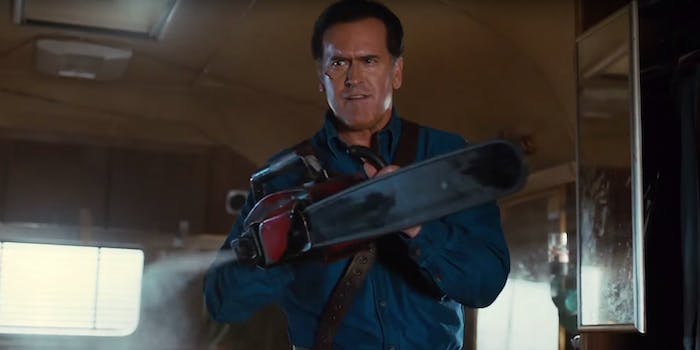 5 reasons why Starz with Amazon is worth every penny

Amazon landed quite a coup this past fall when it signed a deal to bring Starz content to Amazon customers—well, those willing to fork over a monthly subscription, anyway. HBO and Showtime had paved the way for à la carte premium cable content, but Starz had remained one of the biggest holdouts still locked behind the walls of cable and satellite. Thankfully, Amazon’s Starz partnership means those of us who’d been chomping at the bit to watch Ash vs. Evil Dead or Outlander have finally found our salvation. Let the binge-watching begin! Here are five shows that make that monthly Amazon/Starz subscription worth every penny.

(Note: for the purposes of this article, we’re sticking to Starz shows that are still currently airing or due to return for more. Some older Starz series that have already concluded their run, such as Spartacus and Magic City, can be found on traditional streaming services like Netflix.)

Honestly, this show alone would be enough to encourage many to grab an Amazon/Starz subscription—yours truly included. Fans have waited decades for Sam Raimi and Bruce Campbell to return to the bonkers universe they created in 1981’s The Evil Dead, and Ash vs. Evil Dead proves worth every bit of that wait. The series finds Ashley J. “Ash” Williams (Campbell) back in the “normal world” after the time-hopping antics of 1993’s Army of Darkness, with Ash yet again working a shitty job at a shitty store (although not an SMart). He’s past his prime in just about every way, using his missing hand to coax sympathy lays from the local bar crawlers. Then Ash does something very stupid—and very Ash—and inadvertently unleashes the Deadites on an unprepared world. Soon he’s strapping the chainsaw and shotgun back on and kicking ass, just like the good old days… but 30 years older and 30 pounds heavier.

Ash inherits a sidekick for his monster-knocking in the form of Pablo (Ray Santiago), an enthusiastic but frequently terrified co-worker who idolizes Ash and knows more about the supernatural than you’d expect. Also along for the ride is Kelly (Dana DeLorenzo), the new girl from work who has a very personal stake in this new Deadite outbreak, and who is not impressed by Ash’s pickup lines. Lucy Lawless also shows up, but saying anything more about her would spoil the fun.

Ash vs. Evil Dead is hilarious, fast-paced, and bloody as all hell—everything you’d expect from Evil Dead. Crack open the Necronomicon and summon up all 10 episodes with your Amazon/Starz subscription, then curse the long wait for season 2.

There are plenty of Outlander viewers who were lured in by the brand alone: It’s based on the historical time travel/romance novels penned by Diana Gabaldon, a series that inspires just as much passion in its fanbase as Twilight does among the Twihards (but with better writing and less tween screeching). The Outlander books were never on my radar, however, until I heard who was running the TV adaptation: Battlestar Galactica’s Ronald D. Moore. It seemed an odd pairing to say the least, but then again that show was always less about the sci-fi trappings and more about the humanity inside the space-bound tin cans. Similarly, Outlander’s whole time-travel thing is just an excuse to set in motion a sweeping tale of romance, adventure, and men with nice calves wearing kilts.

Outlander is the tale of Claire Randall (Caitriona Balfe), a married nurse in World War II who suddenly finds herself dropped into 1700s Scotland. And, very shortly thereafter, into the arms of a dashing Highlander named Jamie Fraser (Sam Heughan). Their love affair plays out against the background of real history, not to mention Claire’s romantic history; her concerned husband is still very much married to her back in (forward in?) good old 1945. The romance is as epic and sweeping as the scenery, and the two leads have genuinely explosive chemistry together. The characters involved are also a lot more complicated and interesting than the inevitable romance novel comparisons might suggest. There’s plenty to love here even if you don’t think this is “your type of thing.”

Two seasons of Outlander are available with your Amazon/Starz subscription. Season 3 is expected to premiere on Starz in spring 2016.

The delightful Sir Patrick Stewart takes a break from sharing Twitter adventures with the equally delightful Sir Ian McKellen long enough to headline this Starz sitcom about a divorced, hard-drinking former British marine turned broadcaster who travels to America with a dream of conquering the cutthroat world of nightly cable news. Unfortunately for Walter Blunt (Stewart), the biggest obstacles to that goal may be his own blundering and ego. And also the substance abuse. That’s definitely not helping.

Stewart has been showing off his sense of humor for years now by lending his voice to Seth MacFarlane’s troupe of regular voice actors, most notably voicing FBI chief Avery Bullock on American Dad. Now that partnership has traveled to Starz, with MacFarlane executive producing Blunt Talk. The series was created by Jonathan Ames, best known for the underrated HBO series Bored to Death. That show’s lead actor, Jason Schwartzman, guest stars, and the cast also includes Richard Lewis as Walter’s shrink and Stewart’s fellow Star Trek alum Brent Spiner as a piano player at Walter’s favorite bar.

Blunt Talk’s 10-episode first season is available on Amazon Instant Video with your Starz subscription. Starz initially ordered 20 episodes, to be divided into two seasons, so expect the remainder to premiere later this year.

Serving as a loose prequel to Robert Louis Stevenson’s middle-school staple Treasure Island, Black Sails is set some 20 years before the events of that book, right smack in the middle of the so-called “Golden Age of Piracy.” A young John Silver (Luke Arnold)—not yet a feared pirate nor yet having earned the “Long John” nom de pillaging—joins the crew of the notorious Captain Flint (Toby Stephens). The series investigates Silver’s backstory as a former Naval officer and how his long journey into a seafaring legend begins. Those familiar with Stevenson’s book will also recall that Captain Flint’s lost treasure serves as a huge element of the storyline, so there’s a lot being set up here to lead into that much-beloved coming-of-age tale. More importantly, where else on TV are you going to get a freaking pirate show that’s actually worth its salt? Not on Crossbones, that’s for sure (with all due apologies to John Malkovich).

Black Sails was created by Jonathan E. Steinberg (Jericho, Human Target) and Robert Levine, and it’s been described as a “pirate Western”—a description that’s strangely apt, and which has further led to comparisons to Deadwood. Either way, it’s a rich, violent, thrilling look at an era that’s rarely explored in series television, or even on the big screen if a staggering, slurring Johnny Depp isn’t involved. Starz is continually taking risks on bold concepts that are far outside the standard “doctor/lawyer/cop” trifecta of network television; let’s hope it doesn’t lose that daring anytime soon.

Three seasons of Black Sails are available on Amazon with Starz. A fourth season will premiere on Starz in 2016.

Not to be confused with the PlayStation original Powers, Starz’s Power follows James “Ghost” St. Patrick (Omari Hardwick), the owner of one of New York City’s hottest nightclubs. He’s also heavily involved in the Big Apple’s web of illegal drug trade, a double life that constantly threatens to collapse the whole mess on top of him. It doesn’t help that he’s carrying on an affair behind the back of his wife (Naturi Naughton)—with a government agent, no less—or that his buddy Kanan (Curtis “50 Cent” Jackson) just did 10 years behind bars and is convinced Ghost helped put him there. What’s a wealthy nightclub owner/drug kingpin to do?

Power was created by Courtney Kemp Agboh, a TV veteran of shows such as The Good Wife and The Bernie Mac Show. In addition to playing Kanan, 50 Cent also serves as a producer on the show. Even if the show hasn’t been on your radar, you might have heard of it last year when 50 Cent was throwing shade at Fox’s Empire for allegedly using marketing materials that were reminiscent of his own show. For her part, Empire actress Taraji Henson responded to the claims by joking on Twitter that “I pay attention to $’s NOT cents.” Swish.

Both season of Power are available on Amazon with Starz. A third season will premiere this summer on Starz.