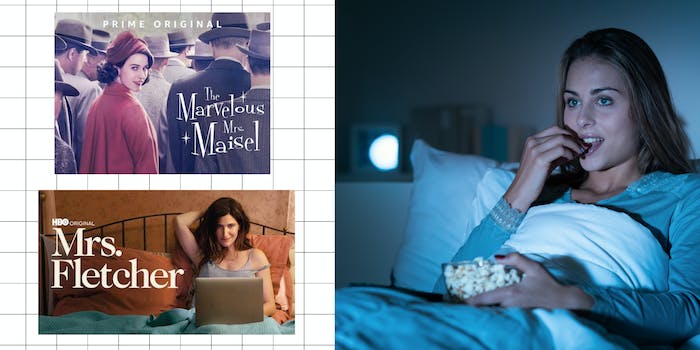 It’s okay to be by yourself. Need a little confirmation? Here are the best shows and movies about being single

Whoever said America’s favorite pastime was baseball clearly could not see into the future of streaming services. As of 2021, more than 70% of American consumers are subscribed to a video-on-demand service. It’s only right to assume that a large chunk of those on-demand video viewers is singles chilling at home on their own. If you’re a single streamer searching your video platform for the best movies and shows about being single, we’ve got you covered.

From rom-coms that play out like horror stories to marriages you couldn’t bear to be a part of, these movies and shows will have you appreciate your single life and feeling bad for all those S/O committers out there. Be single and be proud.

Best movies and shows about being single

1) Yes, being single can be fun!: Sex and the City

It’s hard for me to believe there are still those out there who haven’t seen Sex in the City, but apparently, there are. Listen up; this is hands down one of the best shows about being single. Follow Carrie Bradshaw, relationship and sex columnist in New York City, and her three unique friends as they navigate life, love, and sex in their thirties.

While the main character seems to be on the endless hunt for love and a relationship, I recommend you turn your sights to the single woman of the century; Miss Samantha Jones. As one of the four main leads in the Sex and the City universe, Samantha Jones is the freest, single, and sex-driven of them all.

Follow her care-free attitude exploring all the taboo sexploitation of the decade, and fall in love with being single. If you can live the Samantha Jones way, you’ll never want to be anything but single ever again!

We love the message that Marvelous Ms. Maisel sends to divorcees everywhere; life doesn’t stop with your partner! This hilarious and wholesome show from Amazon Prime follows Ms. Maizel as she rediscovers herself while going through a divorce. This once-perfect housewife finds her voice and her freedom and learns to let loose.

It’s the perfect show for someone who’s a little down in the dumps about their future. Just like Ms. Maisel, you too can find a way back to yourself again. Embrace your single and let it shine!

3) Single at any age can be sexy: Mrs. Fletcher

It’s the perfect way to gather some inspiration post-marriage on how to jumpstart your sex life, and personal life, in a whole new direction. Single and ready to mingle, anyone?

4) Marriage can be one of the worst things in life: The Great

We’re about to drop a big bomb on your views of marriage, ready? Not all marriages are great. If you’re getting over the marriage hump or feeling down in the dumps because it might never come, watch The Great for a whole new perspective.

This Hulu show follows Catherine The Great as she navigates her new arranged marriage with the deranged King of Russia. Watch marriage through her eyes as her new husband makes her life a living hell. When cheating, abuse, and degradation aren’t enough, maybe murder will seal the deal for the worst marriage of all time?

By the time you finish this series, you’ll be patting yourself on the back for staying single.

5) Friends can fill that void: Only Murders in the Bulding

When you’re single and you’ve got some time on your hands, put on a show that showcases the only great love you’ll ever need: the love of murder podcasts. Only Murders in the Building follows a band of three unlikely friends who find an unbreakable bond through their love for amateur crime-solving.

Their whirlwind tail will take you through tons of ups and downs, laughs, and gasps as they try to solve a string of murders taking place in their apartment building. By the time you finish, you’ll be calling up your friend group to set up a weekly podcast listening party.

6) Not everyone is who they say they are: Joe Millionaire

If you ever needed confirmation that not everyone in a relationship is who they say they are, Joe Millionaire is the show for you. The premise: two men, one rich, one not, and 24 women who have no idea who is who.

While the men are searching for true love, they’re tasked with another heavy burden. These men need to sniff out who’s there for love and who’s there for the money. The cherry on top? The super-candid behind-the-scenes interviews let you, the viewer, know exactly where these women stand.

In a fight for the heart, will love prevail?

HBO’s Euphoria is mostly known for its deep dive into the serious effects drug addictions can have on adolescents. However, its drama-filled relationship storylines are enough to make any single person proud of their choice to stay away.

The tea with Rue and Jules is hot, but they’re not the only couple with their priorities out of whack. Moving into season two, you’ll be sitting on the edge of your seat with way more couples than them. We don’t want to throw you any spoilers, so we’ll keep it pretty surface level. If we had to sum it up in one phrase, it would be “toxic tension rising.”

8) The relationship road is rocky and long: Insecure

Finding your “person” may seem like a road you want to venture down, but HBO’s Insecure will have you second-guessing. From an untrained eye, the dating world may seem like a fun place to exist in for some time. What’s a month or two compared to the rest of your life, right? Wrong.

At the start of the show, the protagonist finds herself in an unhappy long-term relationship that’s run its course. She decides to get back into the dating pool, unaware of the trials and tribulations that will soon follow. Somewhere around boyfriend number six, you’ll definitely be happy you’ve stayed single.

Now, this is one twisted story about love, revenge, and cold-blooded murder. From the very beginning, this movie will have you clutching your pearls and staying farther away from the dating pool than you ever have before.

Cassie is a smart young woman with a tortured past. Unlike most women in the dating world, she knows what kind of monsters often lurk below the surface. When she finally sets her sights on the cause of all her trauma, she plans to finally give him the punishment he deserves. Does a “well-meaning man” really exist? Or are they all monsters of a different breed?

10) Do you really know who’s sleeping next to you?: You

On its third season run, with a fourth on the way, You is a definite hit series and possibly one of the best to watch if you want to feel good about being single. Follow Joe Goldberg as he psychopathically searches for and creates the relationships he craves through sheer force of will.

Fate has no business in this creepy series. It’ll have you looking over your shoulder on your walks home and closing the blinds shut before bed. You is currently available to stream on Netflix, but if you don’t have an account, you can also watch the series on Amazon.