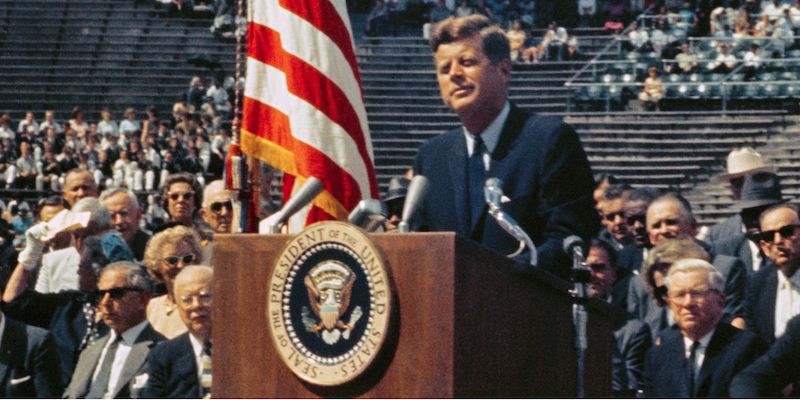 Photo via NASA on the Commons/Flickr

Reflecting back on our nation's greatest leaders.

Presidents Day is time to reflect and show appreciation for our nation’s greatest leaders, those who have led the country and lifted the people up with their inspiring words and courageous actions. Acast, the Swedish podcast platform, recently released a new series, Presidents’ Day Collection, highlighting the most influential presidential speeches. The collection, which was done in collaboration with the National Archives, dates back to JFK’s memorable inaugural address in 1961.

“We thought, let’s do something political, but what everyone can feel good about, which is reminding people how powerful the U.S. presidents and the presidential post is,” said Caitlin Thompson, Acast’s U.S. director of content. “That this can be a clarion call to be optimistic and get people to work together.”

Listed below are Acast’s 10 most influential speeches from former U.S. presidents in the past 50 years to rouse inspiration and positivity that is sometimes forgotten. 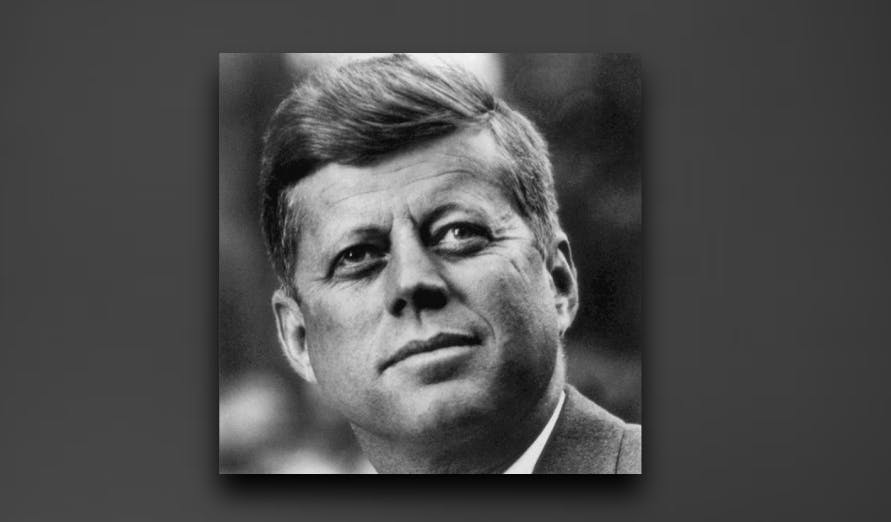 Former President John F. Kennedy was sworn in as president Jan. 20, 1961, as the 35th president of the United States. His inaugural address was memorable for many reasons, including his use of the phrase “my fellow citizens,” which was last issued by George Washington and rejected by former presidents due to its informal nature.

Here’s the final thrust of the address.

In the long history of the world, only a few generations have been granted the role of defending freedom in its hour of maximum danger. I do not shrink from this responsibility–I welcome it. I do not believe that any of us would exchange places with any other people or any other generation. The energy, the faith, the devotion which we bring to this endeavor will light our country and all who serve it–and the glow from that fire can truly light the world.

My fellow citizens of the world: ask not what America will do for you, but what together we can do for the freedom of man.
Finally, whether you are citizens of America or citizens of the world, ask of us here the same high standards of strength and sacrifice which we ask of you. With a good conscience our only sure reward, with history the final judge of our deeds, let us go forth to lead the land we love, asking His blessing and His help, but knowing that here on earth God’s work must truly be our own. 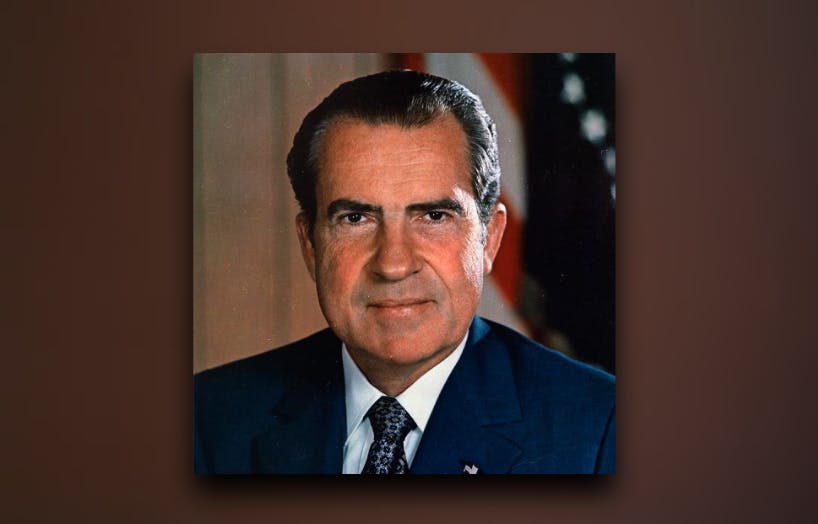 President Richard Nixon delivered his first inauguration address Jan. 20, 1969. Nixon’s presidency was, of course, one of the most controversial, resulting in resignation. Despite the Nixon administration continuing the war in Vietnam in 1973, his inauguration address talked of peace and solidarity.

We are caught in war, wanting peace. We are torn by division, wanting unity. We see around us empty lives, wanting fulfillment. We see tasks that need doing, waiting for hands to do them.

And to find that answer, we need only look within ourselves. 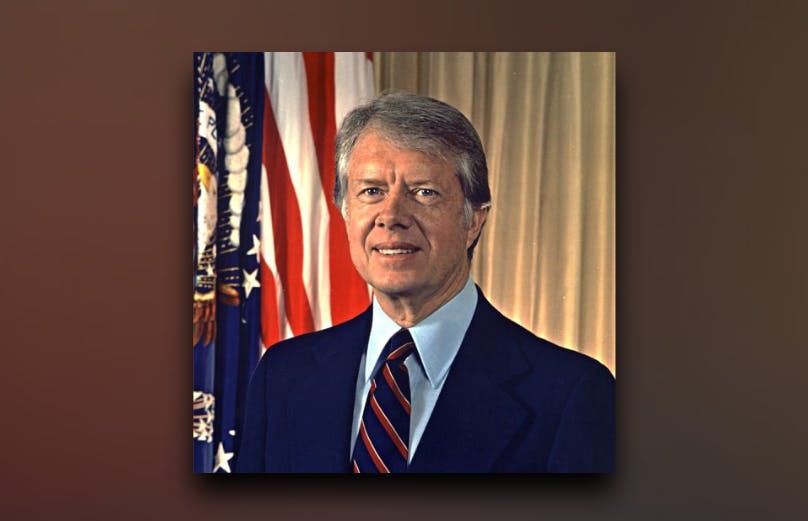 Jimmy Carter was sworn in as the 39th president of the United States on Jan. 20, 1977. However, his inaugural address was not the pick for the podcast series. Instead, they chose his famous “Crisis of Confidence” address to the nation that was televised on July 15, 1979.

Little by little we can and we must rebuild our confidence. We can spend until we empty our treasuries, and we may summon all the wonders of science. But we can succeed only if we tap our greatest resources — America’s people, America’s values, and America’s confidence.

I have seen the strength of America in the inexhaustible resources of our people. In the days to come, let us renew that strength in the struggle for an energy secure nation. 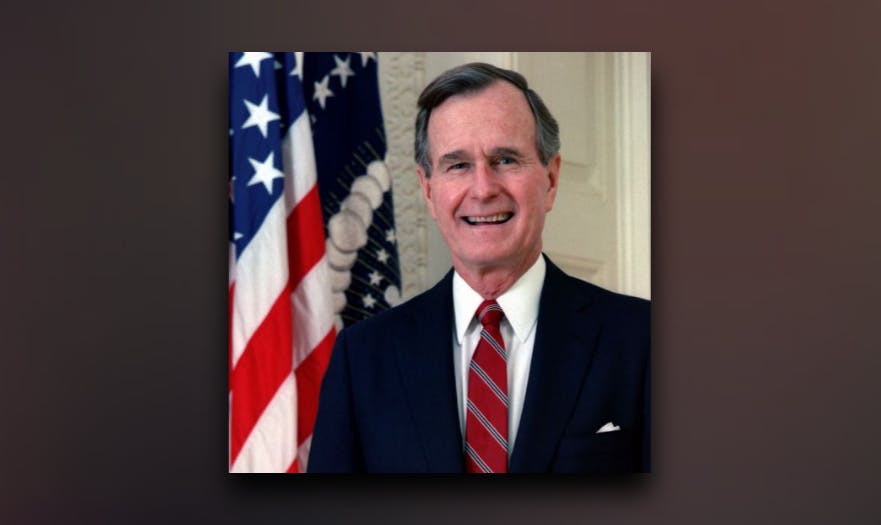 President George H.W. Bush’s inaugural address on Jan. 20, 1989, carried on his campaign’s promise for a “kinder, gentler” nation and also emphasized the need to tackle the federal budget deficit.

Some see leadership as high drama and the sound of trumpets calling, and sometimes it is that. But I see history as a book with many pages, and each day we fill a page with acts of hopefulness and meaning. The new breeze blows, a page turns, the story unfolds. And so, today a chapter begins, a small and stately story of unity, diversity, and generosity — shared, and written, together. 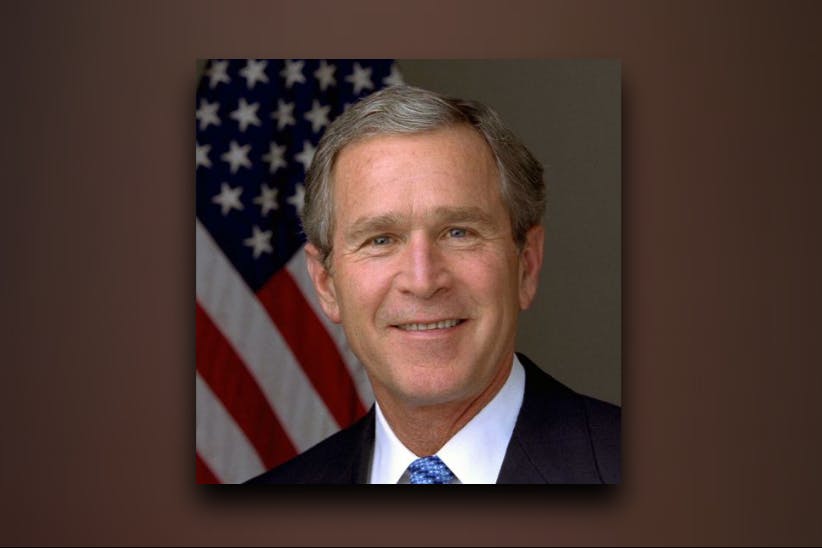 President George W. Bush gave one of the most memorable speeches at the Islamic Center of Washington, D.C., on Sept. 17, 2001, six days after the terrorist attacks of Sept. 11 on the World Trade Center, the Pentagon, and a failed hijacking that resulting in a deadly crash in Pennsylvania.

In his speech, Bush stated “Islam is peace,” that the millions of Muslims in the U.S. are an “incredibly valuable contribution to our country,” and that American’s should treat each other with respect. In a time of crisis, Bush gave the speech to comfort the wounded country and bring the people together.

Jenna Bush, his daughter, recently shared the text of the speech after President Trump issued his controversial travel ban.

“This is not the America I know…” just a reminder this am to teach acceptance and love to our kids for all races, all religions.. pic.twitter.com/32XohAGMv7 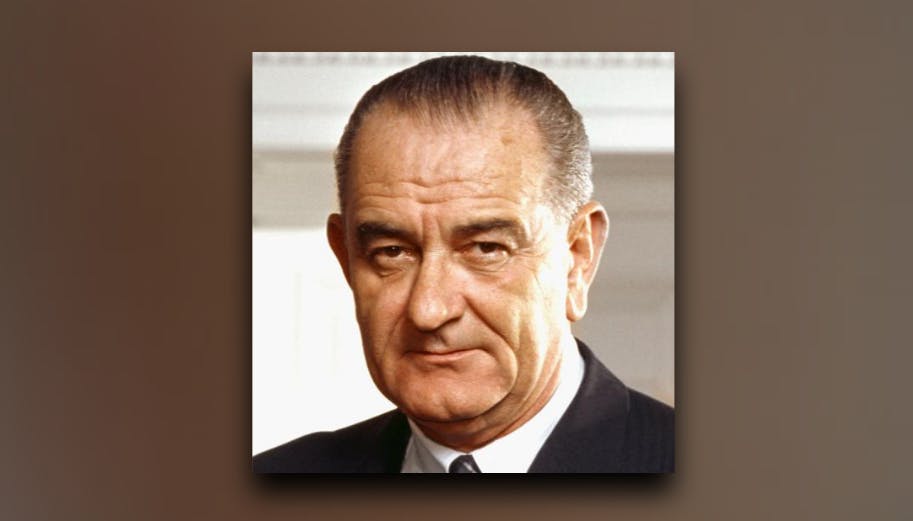 President Lydon B. Johnson, or LBJ, was the 36th president of the United States. His speech on the Voting Rights Act before Congress on March 15, 1965, was one week after Bloody Sunday, where peaceful protestors were beaten in the famous walk from Selma, Alabama, to Montgomery. His speech stated there “is only an American problem” when it comes to segregation and racism, delivering notes of unity, stating all Americans have the right to vote.

This was the first nation in the history of the world to be founded with a purpose. The great phrases of that purpose still sound in every American heart, North and South: “All men are created equal”—”government by consent of the governed”—”give me liberty or give me death.” Well, those are not just clever words, or those are not just empty theories. In their name Americans have fought and died for two centuries, and tonight around the world they stand there as guardians of our liberty, risking their lives.

Those words are a promise to every citizen that he shall share in the dignity of man. This dignity cannot be found in a man’s possessions; it cannot be found in his power, or in his position. It really rests on his right to be treated as a man equal in opportunity to all others. It says that he shall share in freedom, he shall choose his leaders, educate his children, and provide for his family according to his ability and his merits as a human being. 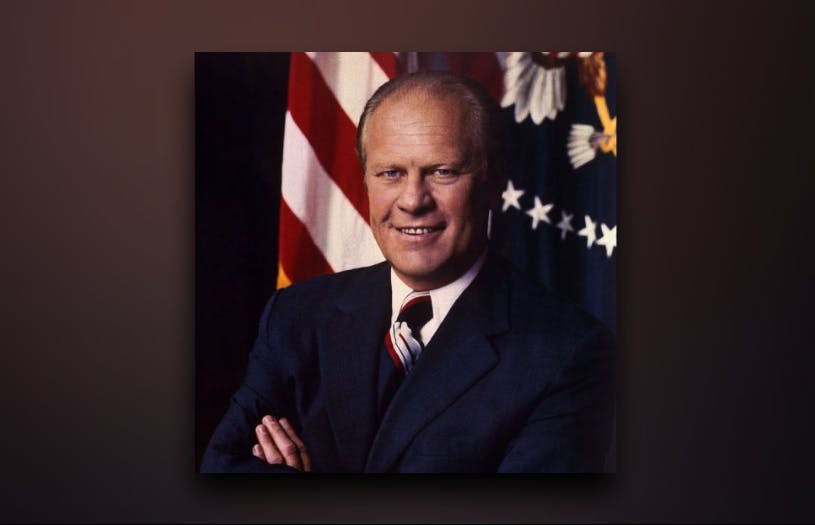 Gerald Ford was the 38th president of the United States, serving from 1974 to 1977. His inaugural remarks speech on Aug. 9, 1974, was impactful in the way he addressed the nation as “a straight talk among friends.”

As we bind up the internal wounds of Watergate, more painful and more poisonous than those of foreign wars, let us restore the golden rule to our political process, and let brotherly love purge our hearts of suspicion and of hate. 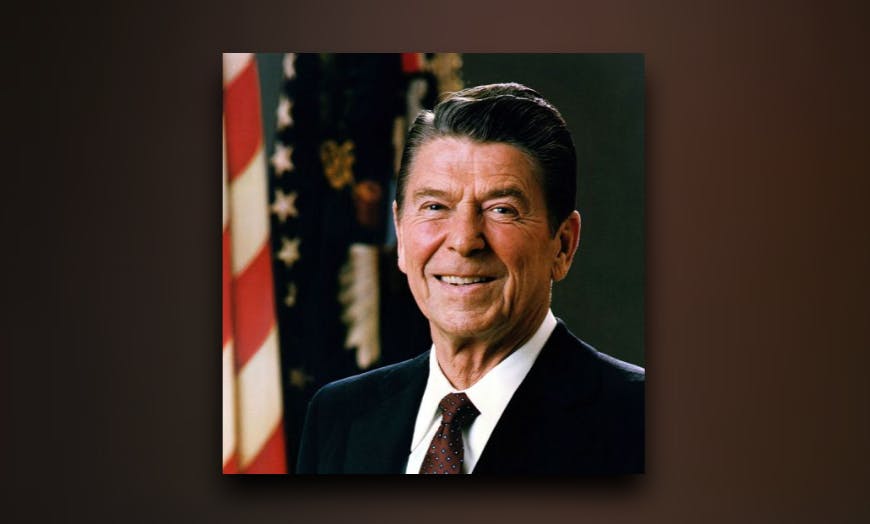 The 40th president of the United States, Ronald Reagan, made iconic remarks at the Brandenburg Gate in West Berlin on June 12, 1987.  Reagan addressed the leader of the Soviet Union, Mikhail Gorbachev, to open up the Berlin Wall in 1987 saying, “Tear down this wall! “Tear down this wall!” 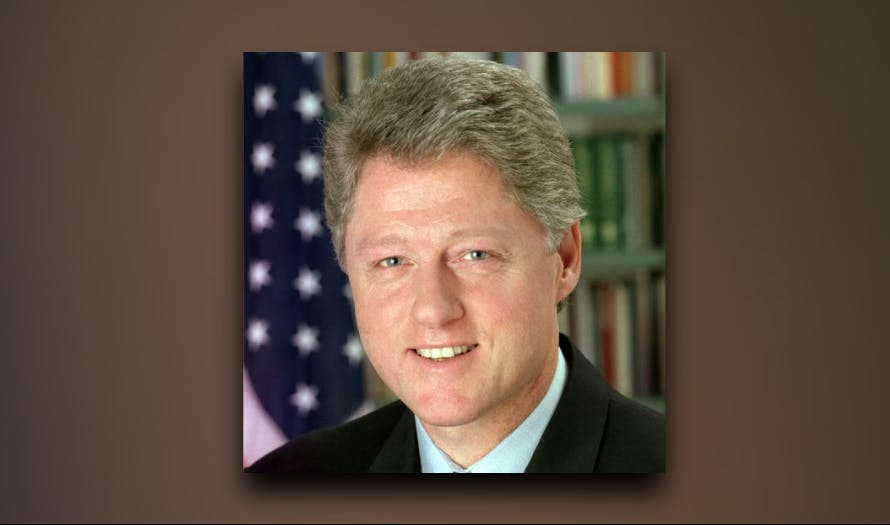 The 42nd president of the United States, Bill Clinton, became the first Democrat to serve as president in more than a decade when he took the oath of office. Clinton delivered his inaugural address on Jan. 20, 1993, focusing on “American renewal.” Maya Angelou recited a poem, becoming the first poet at an inauguration address since Robert Frost spoke during John F. Kennedy’s address in 1961.

Today we do more than celebrate America. We rededicate ourselves to the very idea of America, an idea born in revolution and renewed through two centuries of challenge; an idea tempered by the knowledge that, but for fate, we, the fortunate, and the unfortunate might have been each other; an idea ennobled by the faith that our Nation can summon from its myriad diversity the deepest measure of unity; an idea infused with the conviction that America’s long, heroic journey must go forever upward.

President Barack Obama made history as the first black president of the United States, and his first inaugural address on Jan.ry 20, 2009, recognized the financial crisis the nation was facing.

We are a nation of Christians and Muslims, Jews and Hindus — and nonbelievers. We are shaped by every language and culture, drawn from every end of this Earth; and because we have tasted the bitter swill of civil war and segregation, and emerged from that dark chapter stronger and more united, we cannot help but believe that the old hatreds shall someday pass; that the lines of tribe shall soon dissolve; that as the world grows smaller, our common humanity shall reveal itself; and that America must play its role in ushering in a new era of peace.

“Whether you like any one of those presidents or not, you can’t deny the fact that their words were sort of filled with hope and optimism, and some leadership,” said Thompson. “I think, you know, we felt like it was a good time to remember that this Presidents Day.”