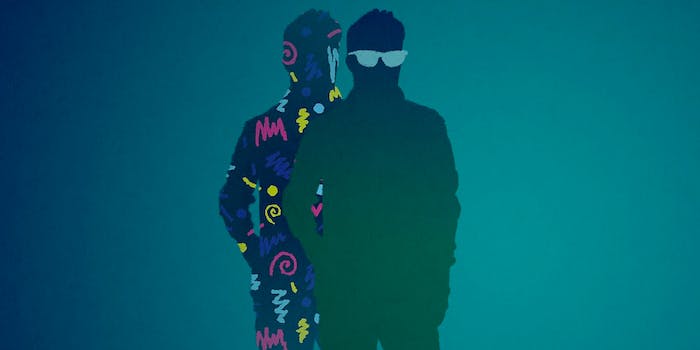 It was the best of times, it was the weirdest of times. And it's coming to a stocking near you.

Why is it so easy to get nostalgic about the ’90s? By all evidence, the age of dial-up modems, VHS players, and flare jeans kind of sucked. But the people of this awkwardly named decade (come on, the 2010s?) seem to be caught up in a ’90s nostalgia boomlet. Ask any person whose childhood didn’t involve an iPad, and the last decade before the millenium was just fantastic.

Lucky for us, thanks to today’s technology, virtually any item of pop culture we miss from the ’90s, from Friends to Clueless to My So-Called Life, can be livestreamed on Hulu or Netflix, ordered on Amazon Prime, or has a sequel or re-boot in theaters.

So, remind your loved ones during this holiday that the dream of the ’90s doesn’t necessarily have to ever end. Fill everyone’s stockings with a variety of Clinton-era relics (Bill, that is).

The dark secret of The Magical School Bus was that no real science teacher could ever stack up to Mrs. Frizzle. I mean, she took her students on a field trip to the inside of another student. This “World of Germs” science kit will teach you how to you grow your own bacteria, make a fungus bubble, use yeast to inflate a balloon, and more. It’s how science class was meant to be. We all remember Space Ghost Coast to Coast as the weirdly retro show on Cartoon Network that our parents wouldn’t let us watch since it was on Adult Swim. Of course, we snuck in the living room late at night and watched it anyway. To be honest, Daria would probably care less whether you have an iPhone or an Android. So everyone in the office can know what you’d rather being doing right now.

5) My So Called Life stud earrings Now Angela and Jordan Catalano from My So Called Life can finally be a pair, at least on your ears. Yes, it’s possible that Mystery Science Theatre 3000 might be on its way to a Kickstarter-funded reboot. You can throw your money at that, or spend it on something MST3K-related that will at least clothe you. You know if gel manicures and nail decals inspired by the show Freaks and Geeks existed when you were in high school, you’d be all over that. Even movies about the future were better in the ’90s. These Fifth Element vinyl figures will remind you of this campy sci-fi film of the not too distant past. Most people might find the yellow tartan ensemble that Cher wore in Clueless hard to pull off, but if you’ve got it, flaunt it.

10) Are You Afraid of the Dark?  Samsung Galaxy case Because we have smartphones, we’re never bored enough to meet our friends in the woods at midnight to tell each other scary stories by a campfire. Luckily, the members of the Midnight Society on the Nickelodeon show Are You Afraid of the Dark? never had smartphones. If Full House was everything that was wrong with sitcoms in the ’90s, then this Bob Saget “Thug Life” T-shirt is everything that’s wrong about ironic t-shirts in 2015. Wear it and embrace the wrongness of two different decades! Fill it with hot liquid, and Pac-Man appears like magic! Everytime you’d hear the chirpy “You’ve Got Mail!” voice greeting when you logged onto AOL, your heart would lift a little. Now, you’ll never hear “You’ve Got Mail!” again, unless you download this handy Chrome extension for Gmail. Parents would wait in line for hours to score their children a Tamagotchi. Now, you can order a 2015 version of the popular digital pet from the ’90s in various animal prints on Amazon Prime. Will it be as fun? Probably not. But your third-grade self would be psyched. This barrel inspired by Donkey Kong is meant to store game cards, but you’ll probably end up using it as a pencil holder. What would childhood summers of the ’90s be without watching the exploits of those nutty kids of Camp Anawanna on Nickelodeon’s Salute Your Shorts? It was almost as fun as going to actual camp, which is why you never went. Mostly it was to avoid running into the real-life version of Donkey Lips, the summer camp bully. If the pink Power Ranger was your favorite heroine growing up, why not have her star in your living room? What would happen if Chewbacca mated with Furby, your favorite toy fad from the ’90s? Furbacca. Yes, people, Furbacca is now a thing. Hide your wife, hide your kids. Back in middle school, your Trapper Keeper was the center of your universe. More than a binder, it was a binder that trapped all your papers inside so you wouldn’t risk losing them. The most fool-hardy among us would hack their Trapper Keeper to store other important things, such as snacks, library cards, and bus passes. Pretty soon, you found yourself never having to stop at your locker because you had everything locked up in your Trapper Keeper. It was also available in a million different designs, so there was no risk of someone else (God forbid) picking up your Lisa Frank Trapper Keeper with rainbows and unicorns by accident. With this Star Wars Trapper Keeper, you can introduce some lucky tween in your life to the beauty of portable filing and the Star Wars movies, all at once. Price: $8.99 The characters of Seinfeld are so iconic you can recognize them by the silhouettes of their hairstyles. The Spice Girls were your original beauty inspiration back in third grade. Why not pay homage to them now? A rare artifact from the ’90s, repurposed into a notepad!