The NFL, ever vigilant about putting online only what the league wants you to see online, proclaimed in May that it would place 96 classic full-length games on YouTube, and it allowed fans to vote on their three favorite contests from the history vaults of all 32 franchises.

The votes have been tallied, the winners have been announced, and from July until Super Bowl 51, the games will continuously debut for YouTube audiences around the world.

That leads to this question: If you’ve only got time to watch 10 out of the 96, which ones should you watch? That’s an excellent question. Should you go with only Super Bowl games (25 of the 50 Super Bowls played are listed) or should you peruse the classic performances? The games that are time capsules of the sport, both in its current form or in the past? Or just the games that will be remembered forever?

With this many games, you could do both—or neither. But there are at least 10 games you absolutely should watch when they’re uploaded to YouTube.

If you live in Houston or have an affinity for the modern-day Tennessee Titans, it might be best to skip over this game. This featured the biggest comeback in NFL history when Buffalo, which was losing 35-3 in the third quarter, somehow scored 38 points in the final 27 minutes of the game to nab the monumental victory. Considering Buffalo has never won a Super Bowl (and entering the 2016 season, it hasn’t been to the playoffs since 1999), this might be the most uplifting contest in franchise history.

When Cowboys fans selected their favorite contests, the three highest vote-getters were all Super Bowl victories (whether that speaks to the fans’ enthusiasm for past glory days or it’s simple narcissism is another story entirely). But let’s go with this victory. Not because it was particularly exciting (Dallas won 24-3 to end the 1971 NFL season), but because it was the first Super Bowl victory in team history. If you like rushing and good defense—old-school football, in other words—this is the game for you. Dallas rushed for a then Super Bowl-record 252 yards, and the Cowboys became the first and only Super Bowl team to keep the opponent from scoring a touchdown.

While the city of Cleveland finally got a pro sports championship when the Cavaliers won the NBA title, the city went decades without any league-winning franchises. The 1986 Browns were a team that could have won a title, but, just like almost every other moment in franchise history, they screwed it up. And this game is one of the most painful in Cleveland history. Ask any Browns fan about “the Drive”—which alludes to Denver quarterback John Elway’s last-minute attempt to tie the game—and you’ll get this response.

This is the oldest game the NFL is offering on YouTube, and it showcases the first time the upstart AFL team—which eventually was folded into the NFL—triumphed in a Super Bowl. In large part, that was thanks to Jets quarterback Joe Namath, who might be most famous for conducting a chest hair-heavy interview while chilling at the pool in which he guaranteed a New York victory. Hey, at least that interview went better than this one.

The Raiders probably should have won this game. Except a little-known rule was invoked that allowed the Patriots to keep a late-game Tom Brady fumble that was recovered by Oakland. With its new life, New England tied the game, sending it to overtime and eventually winning. Yes, this is the famous (and infamous) “Tuck Rule” game. Think Raiders supporters have gotten over this one?

If you like watching big men in short sleeves suffer in a minus-38 degree wind chill, this is the game for you. Also known as the Freezer Bowl, this was the coldest game in NFL history, and the Bengals offensive linemen played with bare arms. It had a lasting effect. “Ever since that game,” offensive lineman Dave Lapham told the team website 30 years later, “I get colder faster. The thermostat went down a little bit.”

On the very same day as the Freezer Bowl, the game that would become known simply as “the Catch” was played on the other side of the country. You know the Catch, right?

Aside from that wondrous reception, though, this game was actually a good battle between the NFL’s past cornerstone franchise (the Cowboys) and the NFL’s future (the 49ers).

One year after Hurricane Katrina wiped out so much of New Orleans, the Saints made their return trip to the Superdome to face off against the rival Falcons. On the first drive of the game, Steve Gleason—who, a decade later, is suffering the effects of ALS but who has become a brave advocate for the disease—blocked a punt that jumpstarted the Saints to the 23-3 victory. How big was that game for the city’s morale? How much did that blocked punt mean? There’s a statue of the play honoring Gleason outside the dome. 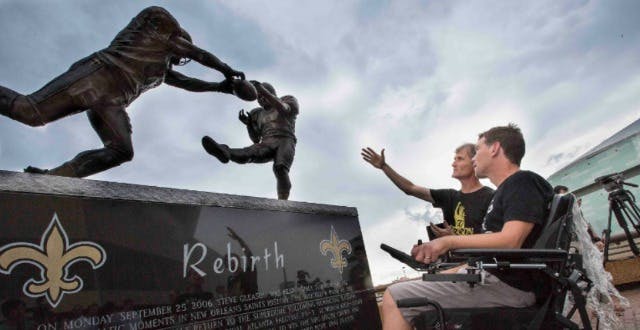 The most well-known play that might have been illegal in NFL history led to one of the best nicknames for a game. This was the Music City Miracle. Finally, the Titans, formerly known as the Oilers, got their revenge on the Bills from their 32-point comeback victory eight years earlier.

Was this the best Super Bowl ever played? Maybe. Did it have the most clutch performance by a receiver whose career will be remember solely for one singular play? Yes. That would be New York’s David Tyree making a circus catch on fourth down against his helmet as the Giants drove late in the game to beat the Patriots and keep that 2007 New England team from becoming only the second undefeated NFL squad in history. A great catch by Tyree, quite possibly an even better play by Giants quarterback Eli Manning, and one of the greatest late-game performances in NFL history. Never has a finer catch been made when it mattered the most.