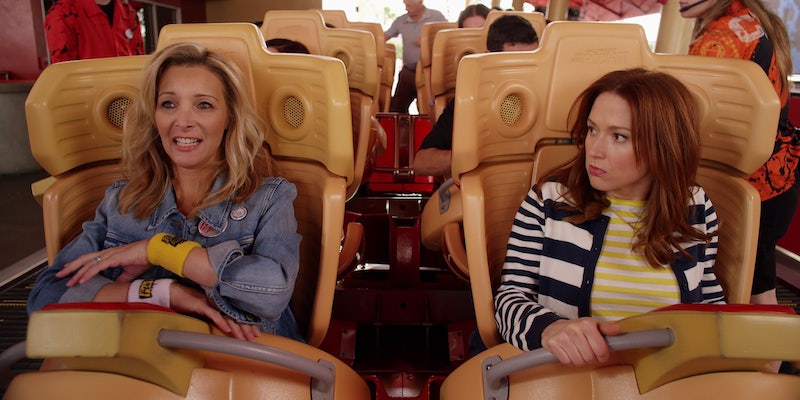 Think you’re too far behind to start? Hush now. Don’t ever let that keep you down.

Here’s a guide to the best original series Netflix has to offer.

This series is an homage to so many ‘80s movies, but it doesn’t just lean on source material. Creators the Duffer Brothers unravel a fantastical, terrifying universe of monsters in the woods, upside-down netherworlds, shadowy government experiments, fractured families, and unbreakable friendships. And it meta-threads the story together via Dungeons and Dragons. Nostalgia and supernerds? We’re in.

2) Orange Is the New Black

Since debuting in 2013, this Jenji Kohan-helmed series has gone from being about the privileged Piper Chapman (Taylor Schilling) to exploring the lives and backstories of more than a dozen inmates at Litchfield. Across four seasons, it’s zoomed in on race, class, sexual assault, mental health, motherhood, addiction, sexuality, and the oft-appalling conditions inmates endure. It’s one of TV’s most impressive ensemble casts, and the writers make the most of those parallel lives.

This was one of Netflix’s first original breakout hits—a political drama set in D.C. that follows the devious doings of Frank Underwood (a pitch-perfect Kevin Spacey). Underwood is a complicated distillation of the oozing greed and breakneck pace of American politics, as well as our moral compass, for better or worse. He addresses us directly, letting the viewer be his confidante. And the ever-shifting power dynamic between him and wife Claire (Robin Wright) is one of the most compelling on TV.

Ellie Kemper has truly embraced the role of Kimmy Schmidt, an unwitting member of a religious cult who has been returned to the surface world after 15 years underground. The perpetually sunny Schmidt is an anomaly in New York City, where her roommate (Tituss Burgess) and employer (Jane Krakowski) trudge through unhappy lives. Kimmy has her own moments where memories come flooding back, and for a comedy the show does a good job exploring how women deal with trauma. But the show’s fast-paced jokes and Kemper’s unsullied delivery are the hook.

Just before Christmas 2015, Netflix dropped this true-crime documentary to insure we’d be hooked through the holidays and well into the dead of winter. Netflix has dabbled in the documentary genre, but this series, which follows the (second) arrest and trial of a Wisconsin man named Steven Avery, became an overnight hit. We became obsessed not only with Avery and the various characters in his small town, but also attorneys and our own interpretation of justice.

This series lets us peek into Maria Bamford’s brain, and it’s an admittedly weird place. Bamford’s struggle with mental illness has long been a part of her standup sets and webseries, but Lady Dynamite puts her career in Hollywood into perspective. There are broken fourth walls, jokes piled on top of jokes, inept managers, talking pugs, visual gags. If it plays a bit like Arrested Development, that’s because it was produced by creator Mitch Hurwitz, who is the perfect mirror for Bamford’s prismatic self-reflection.

Marvel has made some impressive inroads on Netflix, and in the fall of 2015, it debuted one of its most anticipated series. Jessica Jones (Krysten Ritter) is a Hell’s Kitchen detective whose past life is slowly creeping up on her. It’s one of the most feminist Marvel adaptations: It’s never remarked upon that Jones is a “female detective,” she just someone who’s good at her job. She has flaws and is trying to work through trauma. She’s a sex-positive character, and we see her have (and enjoy) a lot of it. For comic book fans looking for a hero who’s not white and male, it hit the mark.

In line with Jessica Jones, The Fall stars Gillian Anderson as London detective Stella Gibson, who’s on the trail of serial killer Paul Spector (Jamie Dornan) in Ireland. It plays a very long game of cat-and-mouse with Gibson and Spector in the first two seasons, which turned some fans off, but it goes deep into the mental and psychological depths of both.

Netflix has become of stable of fine standup specials, but 2015’s Tig went beyond the stage. It follows Tig Notaro from the night she told a crowd at Largo she had cancer in 2012 through the lows and highs of her personal and professional life after that diagnosis. Notaro’s comedy has always hinged on the observational and absurd, but there are moments of true humanity in it, and in Tig too.

When it was announced that a reboot of HBO’s influential ‘90s sketch series Mr. Show was coming to Netflix, fans were frothing. But this isn’t a reboot; it’s not necessarily banking on nostalgia like so many TV comebacks. Bob Odenkirk and David Cross’s four-episode W/ Bob & David is a standalone entity, and if you weren’t a Mr. Show fan, you could still find something here. If you are a fan, you’ll recognize the circular structure and adherence to satirizing pop culture and backward thinking.

A comedy about a washed up horse sounds like something that might have flown on Adult Swim, but it’s become one of Netflix’s sleeper hits. The titular character (voiced by Will Arnett), a former ‘90s sitcom star, tries to make a comeback after hitting rock bottom, only to find out the abyss goes much deeper. The humans and animals that surround BoJack in “Hollywoo” deepen the themes of isolation and connection.

Aziz Ansari has made relationships and love the foundation of much of his standup, and it’s distilled perfectly in Master of None. Ansari plays Dev, a struggling actor navigating New York City’s dating scene, as well as persistent racial stereotypes and trying to find a way to connect with his immigrant parents. It also has one of the best soundtracks in recent memory, and one of the best comparisons of how women walk home at night versus men.