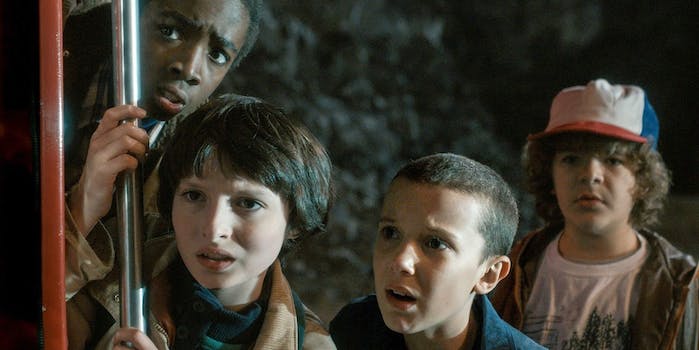 10 films you need to watch if you love ‘Stranger Things’

'Stranger Things' is too short, but luckily its list of influences is long.

From its spooky synthwave score to its consistent references to classic ’80s films, Netflix‘s Stranger Things is not only a terrific show, but an elaborate love letter to a time period those of us over 30 remember very well. Even the title typeface is an homage, having been used in everything from the Paramount Home Video messages to Pulp Fiction.

Passionate fans have started comparing the series’ scenes with those of classic films, finding that its creators even duplicated specific shots from E.T., The Goonies, and Alien.

Speaking of those films, if you’re as madly in love with Stranger Things as the rest of us, you may want to check out some of its influences. Luckily, many of those are streamable on YouTube for a mere $2.99, and since you’ll need something to do while you wait for season 2, you may as well look up a few.

Kids stumbling across unusual friends and growing fiercely protective of them was one of E.T.‘s central themes. The acceptance and lack of judgement between Elliott and E.T. was also a major element of the storyline, and it’s great to see that same connection between Eleven and Mike. Even today, E.T. is still an unforgettable watch, and one that sci-fi fans shouldn’t miss.

A little girl with psychic abilities is a tantalizing plot element, and one of the first films to do it well was the movie adaption of Stephen King‘s novel Firestarter. Starring a young Drew Barrymore, the story also features shadowy government types and questionable experiments. King himself gets many nods in Stranger Things, including a scene where someone is seen reading one of his early novels.

Directed by Brian De Palma, 1978’s The Fury features several characters with psychic powers. A secret intelligence organization kidnaps these people to use their talents for government resources. De Palma is also known for directing the film adaption of Stephen King’s Carrie, which shares some common themes with Stranger Things.

While The Goonies is much lighter in tone than Stranger Things, the banter between Mike, Lucas, Will, and Dustin has a Goonies flavor to it. Dustin is even reminiscent of Chunk with his awkwardness and babbling.

5) Close Encounters of the Third Kind

While Steven Spielberg’s beloved Close Encounters of the Third Kind does not correspond as closely in story to Stranger Things as some of the other titles on this list, there’s a similar spirit between the two films. Spielberg’s signature style can be felt all throughout Stranger Things, so you may want to go back and watch this wonderful movie about aliens making contact if you’ve never seen it.

It’s hard not to think about Spielberg’s seminal horror classic Poltergeist when Joyce (Winona Ryder) makes contact with her missing son by way of Christmas lights in Stranger Things. There are other scenes, which we won’t mention in case of spoilers, but the Duffer Brothers have absolutely tipped their hat to Poltergeist. If you haven’t seen it, do yourself favor and go watch. You’ll never think of clowns the same way again.

This 1986 film about the friendship between four boys and how they react after discovering a dead body in the woods is remembered for its thoughtful character development. From time spent in the woods to the shared mission of solving a mystery, Stand By Me is carefully etched into Stranger Things in many ways. It does an equally fine job of pulling at the heartstrings, too, especially in the interactions between the boys as they adjust to Eleven joining their tribe.

In 1981, creep master David Cronenberg brought audiences a frightening vision of an evil government out to capture scanners—people with telekinetic powers. The nosebleed that Eleven suffers when using her powers makes an appearance in this film, and has been used in many others with similar themes since.

John Carpenter took the horror genre by surprise in 1982 with The Thing, the story of an Antarctic research team that discovers something horrible buried deep beneath the ice. The way Carpenter portrayed dread in this film is something you’ll recognize in Stranger Things as well. He also teases out the viewer’s first glimpse of the monster, another signature of ’80s horror films.

Another Carpenter film on the list? You don’t say! Based on a novel by James Herbert, this is a story about a Northern California town built on top of an old leper colony that is consumed by a fog of vengeance. (Thanks to this and Poltergeist, we learned NEVER to rebuild on top of cemeteries and leper colonies.) The music will sound especially familiar here, as synth soundtracks were very popular in the ’80s, so adding one to Stranger Things was a really nice touch.