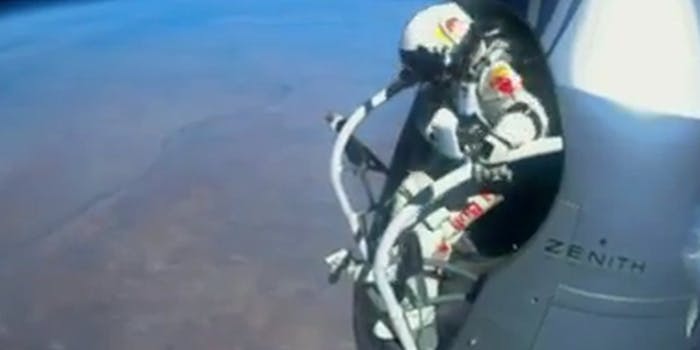 Here are 12 of the year's biggest moments—pixelated, choppy, and repeating ad infinitum.

Time magazine’s Person of the Year shouldn’t have been President Barack Obama or Kim Jong-un or any human at all. The GIF, a 25-year-old animated bitmap image format that shook the sweatpants off every online journalist, deserved the title more. Thanks to astounding feats of human achievement that required neverending replays, the GIF made a comeback to rival Betty White’s and Nas’s.

The Graphics Interchange Format was the subject of a high-profile art exhibit, became the Oxford English Dictionary’s Word of the Year, and propelled blogging platforms such as Tumblr into relevance beyond “thinspo” and One Direction fandom. In five years, human communication will be replaced entirely by reaction GIFs. I, for one, welcome our new media overlords. They’re nothing if not user-friendly.

So here are 12 of the year’s biggest moments—pixelated, choppy, and repeating ad infinitum.

2012 was the year Millennials tricked the world into thinking they were worth billions and billions of dollars. The bullcrap was so palpable on May 18 that Mark Zuckerberg can’t even hold himself upright.

Between the lockout, injury-riddled superstars, and the complete domination of the Heat, the NBA this year gently coaxed most fans into Anne Hathaway–singing–”I Dreamed a Dream” misery. A few exceptions: Excited Grizzlies Kid (game 2 of the Clippers-Grizzlies series, May 2), who inspired entire essays praising his “life-affirming power,” and anyone who watched Jeremy Lin play basketball in February.

It was a week of utter devastation in late October, but somehow America still managed to put on its horse mask and go for a jog.

Humans got kinda bored on this planet in 2012.

See? Earth is so 2011. You will never be happier than this team of NASA engineers who landed their Little Robot That Could on the Red Planet Aug. 5. Unless you’re Excited Grizzlies Kid.

The Olympics and the Obama-Romney Battle for 2012 lent credence to the GIF as a legitimate journalism tool. The events also gave us gems like Obama in a leotard dancing to Beyoncé’s “Single Ladies,” which somehow summed up his victory more than any Getty photo could.

Meanwhile, the GOP’s sad little tower of Jenga bricks came crashing down. There were serious moments, too: Obama hugging Gabrielle Giffords as she announced her resignation Jan. 24 is as poignant of a thing that will ever come out of Tumblr.

Over the course of the Olympics, these grainy, looping animations became ubiquitous in sports journalism. Anyone who made a beeline to The Atlantic and BuzzFeed to watch the mesmerizing, slow-motion replays of Gabby Douglas’s flips can attest to how important GIFs were at breaking down and explaining the nuances of extraordinary feats.

And for a real measure of how far we’ve come, compare McKayla Maroney’s winning vault to Larissa Latynina’s gold medal performance in 1958. (Is she even trying?)