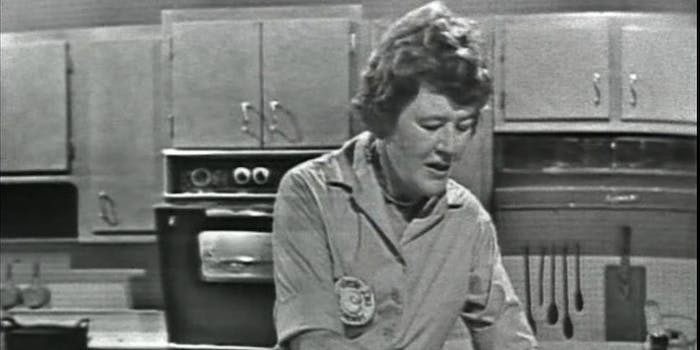 The 5 best cooking shows you can stream for dinner tonight

Alton Brown’s iconic science-meets-grub series got the boot, but fear not.

“Whoa is me,” moan the armchair chefs. “Those mean people at Netflix are no longer airing Good Eats, and we have nothing to watch to satisfy our food video cravings.”

While it’s true that Alton Brown’s iconic science-meets-grub series got the boot, fear not, cooking show devotees: There are plenty of options to stream across your screen while you toil away making your coq au vin or just plop on the couch with a bowl of mac and cheese out of a box.

If Alton Brown is your personal cooking sherpa, you can always watch him do his hosting duties on Cutthroat Kitchen or Iron Chef America on Netflix. Neither is my cup of matcha, but here are five other food shows—some classic, some less so—to fill your personal food show diary.

Yes, Guy Fieri is a real turkey. No one who wears so much bling should be allowed on television, let alone in someone’s kitchen. His stock phrases “welcome to Flavortown” and “knuckle sandwich” are nails on a chalkboard. Still, Triple D is an enduring guilty pleasure that is a zeitgeist to our current food culture. Unlike shows such as Bar Rescue and Kitchen Nightmares (U.S. version) where the scenes are overly orchestrated, this Food Network program has an undeniable authenticity and pop culture zing to it.

Back in 1999, long before Jamie Oliver became a celebrity chef with the noble aim of changing the menus of every school cafeteria, the BBC produced a program that showcased the young Brit’s straightforward approach to cooking. In many ways, The Naked Chef is the model for many current food shows that focus on quick, elegant meals, but none captures the knowledge and passion Oliver displays in this program.

Of the current crop of food experts/chefs on broadcast TV, cable, and streaming, Zimmern is in a class by himself. While there is little chance I will ever eat any of the icky, gooey things Zimmern unearths (so to speak) at a Cambodian market, the man has a deep, savant-like knowledge on a wide range of culinary topics, and he is able to communicate his thoughts in a clear manner that never belittles his audience. Zimmern’s charm is authentic, and he is a master of multiple media with a newspaper column, podcast, and multiple video efforts.

On its way across the Atlantic, the original BBC program featuring celebrity chef and notorious F-bomb dropper Gordon Ramsay went from hearty entrée to wilted side dish. The U.S. version is heavy on drama and light on narrative while the BAFTA-winning Kitchen Nightmares is as much about British food culture and trends as it is saving failing dining establishments. The BBC version on YouTube includes most of Chef Ramsay’s foul language, which is part and parcel of his love-it-or-leave-it personality.

From 1963 to 1973, a quirky, wonderfully talented woman named Julia Child essentially invented the modern cooking show. To this day, no one has come close to displaying Child’s skill (trained at the Sorbonne), signature style, and encyclopedic knowledge of French cuisine. The premise of her show, produced by Boston’s public TV affiliate WGBH, was to prove that preparing French food needn’t be the domain of expert cooks. Imitated and even parodied, the Grand Dame of the food-TV genre has not yet been eclipsed by any cook or food wizard, and we’re doubtful anyone ever will.