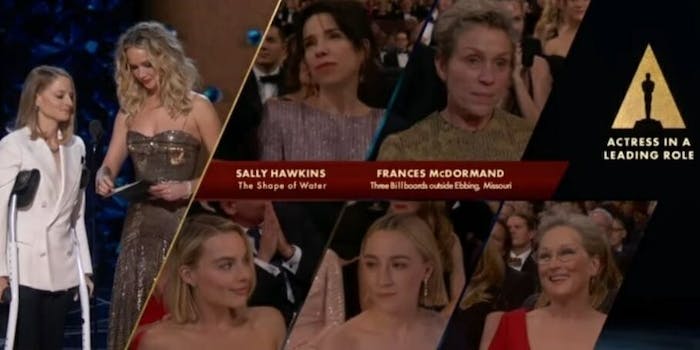 What a moment of solidarity.

After winning her Oscar for best actress on Sunday night, Frances McDermond gave one of the best speeches of the night, asking all the women who had been nominated to stand up and take a special bow. But the best actress nominees who didn’t win had their own special moment after the show.

In a lovely scene, the foursome shared a big group hug.

the best actress losers embracing is the energy I'm taking away from tonight pic.twitter.com/r5oLqn6IGU

That’s Meryl Streep, Saorise Ronan, Margot Robbie, and Sally Hawkins tangled up in each other’s arms, and the internet couldn’t get enough of the love.

Timothée Chalamet instagramming all the Best Actress nominees having a group hug is the Oscars #content we need and deserve pic.twitter.com/MBwC3WJDuL

How i wish that I was #SallyHawkins @MargotRobbie #SaoirseRonan coz #MerylStreep gave them a hug and a kiss. ❤#SquadGoals #Oscars pic.twitter.com/EVwfcZbjrq

For an Oscars telecast that featured so much discussion about the Time’s Up movement and female empowerment, the camaraderie shown by the four who didn’t win the best actress award was one of the most powerful (and fun) moments of the entire evening.