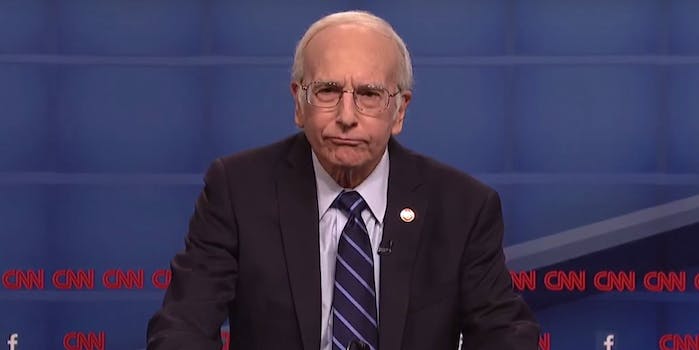 Maybe some people saw it coming, but Larry David as Bernie Sanders is a pretty stellar casting decision by Saturday Night Live.

David showed up on last night’s episode in a sketch about this week’s Democratic debate.

Sanders will be sticking around until the primaries early next year at the very least, so SNL either needs another funny old Jewish man or, preferably, should bring David back every week.

The presidential race will continue to get the SNL treatment. Donald Trump is due to host soon, a decision that’s provoked a petition with over 100,000 signers asking NBC to reverse the decision due to Trump’s comments about immigrants.

Most important of all, David asked the important questions: “Who do you want as president? One of these Washington insiders or a guy who has one pair of clean underwear that he dries on a radiator?”