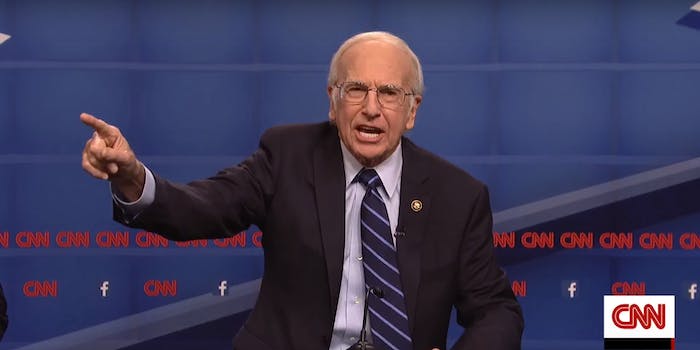 Sanders suggested that David, who played him on 'SNL', should take his place at his next campaign event.

Following in the footsteps of an Internet mashup, Saturday Night Live demonstrated in its most recent episode that Larry David is perfect as Democratic presidential hopeful Bernie Sanders—and Sanders, for one, agrees.

At an event in Iowa on Sunday, Sanders discussed SNL’s cold open, which skewered last week’s Democratic debate, from Kate McKinnon’s Hillary Clinton to Alec Baldwin‘s attention-starved Jim Webb. But David, playing Sanders, was clearly a highlight, perfectly capturing the tone and the bravado of the Vermont senator’s persona.

At one point, David’s Sanders claimed that not only did he not have a Super PAC, but he also didn’t have a backpack, and he only owned one pair of underwear, compared to billionaire candidates who he said had three or four pairs.

Sanders, who only owned one suit when he was the mayor of Burlington, Vermont—a number that grew after he joined the Senate—was in a joking mood as he dispelled the SNL suggestion on Sunday.

“Last week, I bought my second pair of underwear,” he said. “Please don’t write it down. I have an ample supply of underwear.”

Sanders, who danced with Ellen last week, had nothing but praise for David’s portrayal.

“In terms of Larry David, I think we’re going to put him up on the stage of our next rally—let him do it rather than me,” Sanders said. “He does it better than me.”

He also joked that it was his hair that drew people to his campaign, but the discussion soon went back to business as usual as Sanders discussed how his childhood made him an outsider in the Democratic presidential race and the challenges that lay ahead.

And if he is able to win Iowa? That could clear the eventual path to the Democratic nomination.

“If we win in this state—it’s close, but I think we can—I think it lays a groundwork to victory,” Sanders explained. “If we win this thing, it would be the biggest political upset in modern America.”