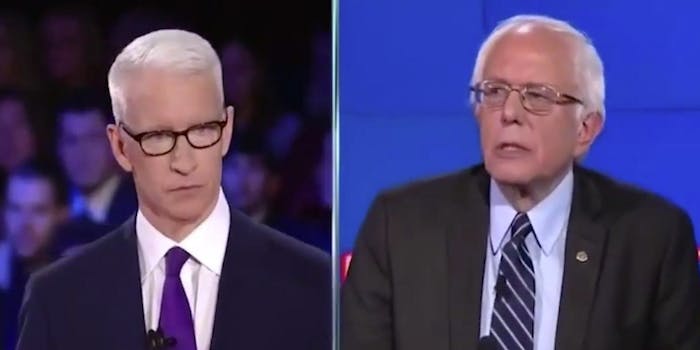 This mashup makes Bernie Sanders the star of ‘Curb Your Enthusiasm’

Creator Dominick Nero was surprised this hadn't been done already.

While a video finally hit YouTube a couple months ago that compared the voices of Larry David and Bernie Sanders, a mashup of material that actually simulated a Sanders/David television show surprisingly didn’t show up until a few days ago.

Considering that it uses the Democratic debate for all the Sanders footage (the arena in which a person is most likely to become caught off guard, confused, and/or frustrated), it’s a mashup that’s well worth the wait:

The few times Sanders stumbled over himself after Anderson Cooper’s questions (to the tune of Curb Your Enthusiasm‘s instantly recognizable theme song), the way he attempts to explain himself, and the fact that he has a genuinely lovely moment with Hillary that ends with him bringing up her email scandal: That’s all just so… Larry.

Larry David told Rolling Stone that his TV counterpart was “my version of Superman. The character really is me, but I just couldn’t possibly behave like that.” Then again, he is sometimes like his version of Superman in real life, too, as this video proves.

While the mashup’s creator, Dominick Nero, told the A.V. Club that Bern Your Enthusiasm is not meant as a political statement, it does serve as “an ominous reminder that, like Larry David in Curb, Bernie Sanders is… by no means the perfect candidate.”

There will be more debates, and we’d love to see a five or six-part series of Bern Your Enthusiasm. A single debate could yield five or six episodes.