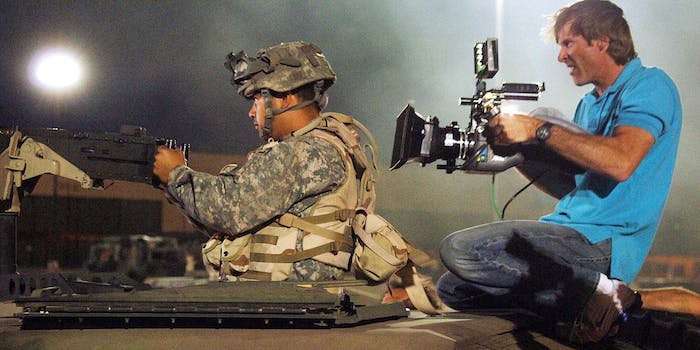 We're sure he can give the subject the restrained, tasteful treatment it deserves.

On September 11, 2012, four people, including U.S. Ambassador Chris Stevens, died in an attack on the U.S. embassy in Benghazi, Lybia. Two years later, and the political reverberations of this tragedy are still being felt in Washington, D.C.’s corridors of power.

Now, Hollywood is looking to turn the #Benghazi horibleness into a movie. Sigh.

Given the topic, the movie could end up taking a litany of different routes depending on the director. Kathryn Bigelow could turn it into a tense thriller about desperate Americans trapped behind enemy lines, as events on the ground quickly spiral out of control. Jay Roach could turn the political circus that followed the attacks into a cutting inside-the-beltway satire. Steven Soderbergh could use Benghazi as a focal point to weave a tapestry about the chaotic unintended consequences of the Arab Spring.

Or, the guy who directed the Transformers movies could use it as an excuse to make a ton of badass explosions while whispering “boom” and giggling to himself.

Yes, Michael Bay, the blockbuster director best know for creating a multi-billion dollar series of toy commercials that only occasionally slowed down and made enough sense to be horribly racist, is in talks to direct an adaption of 13 Hours, author Mitchell Zuckoff’s book about the incident, the Hollywood Reporter reports.

Paramount Studios acquired the rights to 13 Hours in February, well before its release.

Zuckoff’s book, which came out in September, was complied from in-depth interviews with five Central Intelligence Agency (CIA) contractors present during the attack. The book largely focuses on what happened during the fighting in Lybia—not Republicans’ attempts to use the deaths to tarnish the reputation of Hillary Clinton‘s tenure as Secretary of State in anticipation of her presumptive 2016 presidential run.

Bay’s most recent film, Transformers: Age of Extinction, was a massive worldwide hit. Through a strategy of peppering the film with Chinese stars, incorporating product placement with Chinese brands and story elements that showed the Chinese government as powerful and resolute in contrast to the dithering of Western leaders, the fourth film in the Transformers franchise became the highest-grossing flick in Chinese history.

The Benghazi film wouldn’t be the first time Bay has made a movie about someone’s real-life experience. Bay’s 2013 black comedy Pain & Gain was adapted from a series of news articles about a group of bodybuilders who kidnapped and tortured a South American businessman. So there’s that.