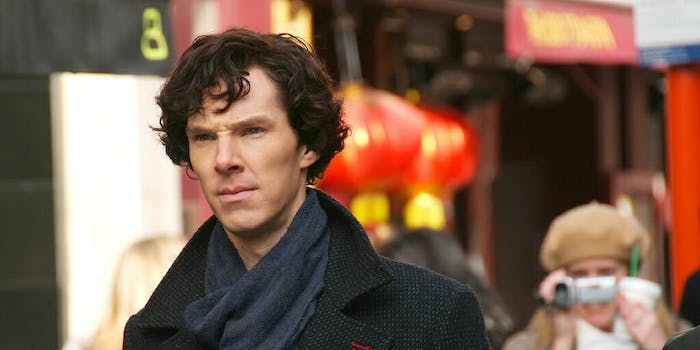 People are calling him a hero.

British actor Benedict Cumberbatch rescued a delivery cyclist from four muggers in London on Saturday, according to the Sun.

It appears that the 41-year-old actor channeled his inner Doctor Strange and Sherlock Holmes—two characters he plays on TV—and literally jumped out of his Uber to save the Deliveroo cyclist after he witnessed the assault.

Uber driver Manual Dias told the Sun that he hadn’t recognized Cumberbatch until he jumped out of the car to stop the muggers—just around the corner from Baker Street, the fictional home of Holmes.

“My passenger jumped out, ran over and pulled the men away. They turned towards him and things looked like getting worse, so I joined in,” he said. “He stood there instructing them in the street, shouting, ‘Leave him alone’. It was only then I recognized Benedict. Then it all got a bit surreal. Here was Sherlock Holmes fighting off four attackers just round the corner from Baker Street.”

Dias said he believes the muggers recognized who they were fighting, as well, and eventually ran away because Cumberbatch knew what he was doing.

“Benedict was courageous, brave and selfless. If he hadn’t stepped in, the cyclist could have been seriously injured,” he said. “He asked the rider how he was and when he said, ‘I’m OK,’ Benedict just hugged him.”

Fans of the actor sung his praises on Twitter following the incident.

Benedict Cumberbatch seriously stopped a Deliveroo worker being mugged, asked him if he was ok and then hugged him. 🤭😢💕#MYGUY pic.twitter.com/N64IxsCHwK

Can you imagine you're away on your bicycle to deliver a Chinese takeaway to someone and four boyos attack you and hit you with a bottle and then you hear someone yell LEAVE HIM ALONE and you look up and Benedict Cumberbatch has come to your rescue?

This is why I love Benedict Cumberbatch, he /IS/a real life superhero. Back in 2013, during the premiere of The Desolation of Smaug, I was waiting in the crowd to get my book signed by him. There were MANY of autograph hounds behind me.
https://t.co/OhLxr6arA8

LADIES imagine this. It’s fifteen years from now. You’re being mugged. You hear someone tell “Leave them alone!” You look up. It’s Benedict Cumberbatch. You jump off the ground and yell “SURPRISE I WASN’T BEING MUGGED FOR REAL!” You make out with Benedict.

Cumberbatch, however, insists that he’s not a hero. He said he just did what had to be done.

Deliveroo is an online food delivery service in the U.K. A spokesperson for the company thanked Cumberbatch in a statement.

“Deliveroo riders are heroes delivering millions of meals to hungry customers right across the country,” they said. “Their safety is our priority and any violence against riders is totally unacceptable. We’d like to thank Benedict Cumberbatch for his heroic actions. On behalf of everyone at Deliveroo: Thank you so much.”