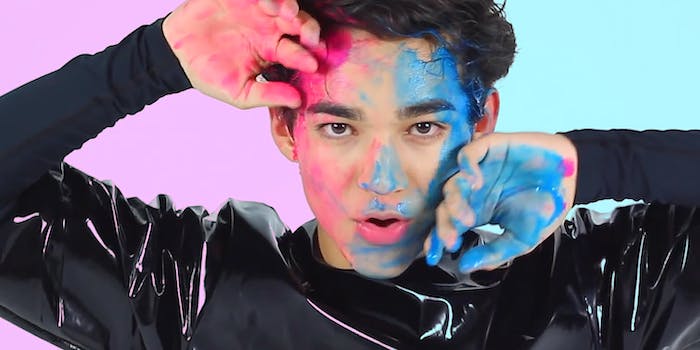 Ben J. Pierce is a force to be reckoned with, and he can't even drive yet.

Three boys adorned in blue stand in repose as portraits of society’s version of maleness, but as one reaches for a pink doll, the others turn and begin chase. This is paired with the lyrics, “Hush boy, oh hush boy / Don’t say a word / throw on a jersey, no one gets hurt” matched with hand claps that begin to build the tension for the next 3:58 of “Little Game.”

This may sound like a high-concept music video from an established, cutting-edge artist, but it’s actually the brainchild of Ben J. Pierce, a 15-year-old who wrote, produced, and sang this very personal yet still socially relevant track dealing with gender roles that’s racked up almost half a million YouTube views.

“At the beginning of this year, I had an encounter with someone who said if I were to fit into the masculine archetype, I would have it a lot easier in life,” Pierce told the Daily Dot of his inspiration for the song. “Of course I was rubbed wrong by that, and I went home and, in a very passive aggressive way, I wrote ‘Little Game.’ It began to grow into something else because the video concept kept coming up.”

Pierce’s song is haunting, both in lyric and melody, and the video is a perfect match. It focuses on two sets of children, boys in blue and girls in pink, who begin to warp the bounds of constructed gender until everything is a swirling mix. It’s a mix of a high-concept dance piece and performance art with pop sensibilities. Even more interestingly, Pierce doesn’t play a role on screen in the video, letting his vision stand on its own while he takes well-deserved directing, production, and even post-production credits. Pierce, who’s been writing music for two years now, conceptualized the entire video himself starting at the beginning of summer, calling a former collaborator, Tumi Mphahlele, to help him realize his vision.

“She was a second opinion and a second voice to expand on what I’d created,” he explained. “After a 12-hour meeting, we sketched out the entire video. Over the next three weeks, we were going to thrift stores for costume pieces and renting out studios. I really like when I immerse myself in the creative realm. For ‘Little Game’ I tried my hand at a lot of things. I was making wardrobe and props and putting together a whole team. It was a month process of making the video after months of pre-production.”

Like many of the other teens who are controlling their own creative destiny in the digital space, Pierce says he’s always been active online.

“I’ve been watching YouTube ever since it was a thing. I was that 5-year-old who had a computer and was already starting to figure out how to do everything. In 2011, I was about to turn 12 when I first made my first video. It originally was going to be documenting my acting journey, and it sort of became an outlet for my own comedy writing and where I could voice my opinions and point of view, which is where my YouTube channel came from.”

KidPOV, the original channel he started, has 25,000 subscribers, and features Pierce doing song parodies, vlogs, costume tutorials, and interviews with other YouTubers like Tyler Oakley. The new single and video are posted on another channel, BennySounds, which is just shy of 14,000 subscribers and a home for Pierce’s original music. In the current climate of budding YouTube stars being snapped up by enterprising multichannel networks, it’s surprising that, for now, Pierce is fully independent.

“Networks are something I’m definitely looking at, but right now I’m trying to figure out where I want to go with all my creative outlets,” Pierce explained.

As the boss of his own growing empire, Pierce has been free to go about his creative projects under his own direction. He’s made it a family affair, tapping his three older siblings to help out on his music videos from crafting props to designing the hair and makeup. He credits social media platforms like YouTube with giving his generation a voice in sharing their own creativity.

“Through [YouTube and other social media] we do have a little more creative control on what we do,” he said. “I’m very inspired by everything going on. I think it’s exciting where we’re in a place where we can create and speak in a public platform and be taken seriously.”

“What’s been interesting this week is seeing the generational effect,” Pierce said. “There are people of older ages who have said, ‘If I had had this at 15, it would have changed how I carried myself and accepted myself.’ That’s something I couldn’t have ever imagined, but it’s exciting. It’s something I get very emotional about. It’s always been something very close to my heart, but to know it’s translated and affected other people, it’s crazy.”

Pierce says it’s all more than he ever expected, and that outpouring of love and support quelled any worries about releasing his work to the world.

“I was very worried about releasing it because it is a such a vulnerable thing that I’ve held very close to myself for so long,” he said. “It wasn’t until a week before we released it that I realized we couldn’t back out. A lot of people are relating to it and taking it to heart. It made all of that anxiety worth it.”