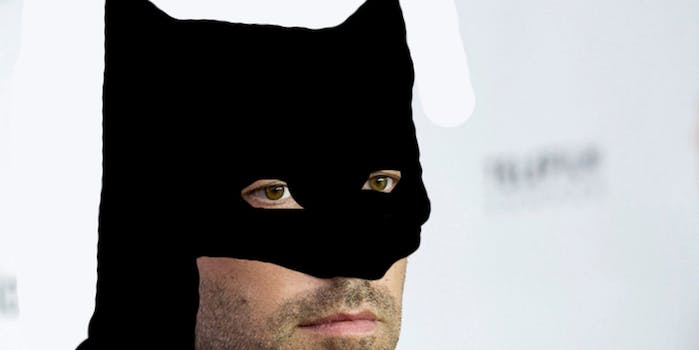 Ben Affleck is the hero the Internet deserves

It took roughly 37 minutes for #Ben Affleck as Batman to start trending worldwide after the news broke Thursday evening that the two-time Oscar winner would be joining the cast of Zack Snyder’s sequel to Man of Steel.

But it took just 3.7 seconds for the Internet to erupt in a universal cry of pain. Or maybe laughter, depending on where you were tweeting.

Coming just a year after the conclusion of Christopher Nolan’s epic Dark Knight trilogy, where Christian Bale played the broody, cowl-wearing superhero, the news was much too soon for just about everybody:

The widely reviled 2003 clunker Daredevil promptly began trending, too, because apparently a decade to forget Affleck’s turn as the titular hero in that film hasn’t been long enough for anyone who actually saw it.

Affleck, who’s received plenty of pop culture pot shots over the years since he shared a screenwriting Oscar with Good Will Hunting with pal Matt Damon in 1998, has a long history of appearing in the public eye. Add to the general shock Affleck’s well-known associations with Damon, ex Jennifer Lopez, Kevin Smith, and, of course, the city of Boston, and the Internet exploded into a Joker’s paradise.

There were plenty of legitimate concerns, however, that the move would be harmful for the Superman franchise as well as beleaguered DC Comics, which has come under increasing fire in recent years for its share of widespread industry sexism and underrepresentation of minorities in its pages.

But mostly the laughter flowed freely, along with plenty of optimism along with the paroxysms of despair. As ontoeternity put it:

If last night on the Internet was any indication, it looks like the return to campy goodness is already upon us.