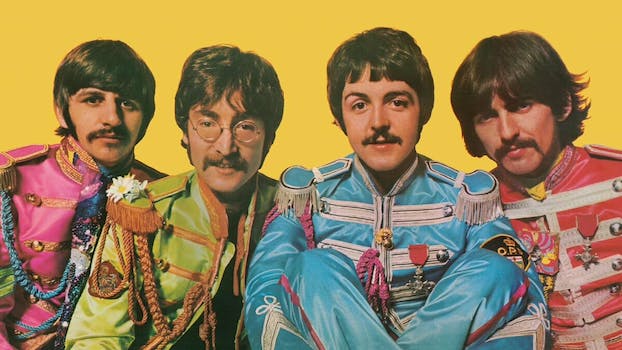 The album's continued popularity quells any doubts about whether Beatlemania still exists today.

When Paul McCartney sings the title track that opens the Beatles’ Sgt. Pepper’s Lonely Hearts Club Band, he does so with a great deal of fictionalization.

“They’ve been going in and out of style, but they’re guaranteed to raise a smile,” he snarls, referring to Sgt. Pepper’s Lonely Hearts Club Band, the alter ego the Beatles adopted for themselves on their landmark 1967 release. On the contrary, the band had cemented its status as a cultural phenomenon several years earlier. Everything they touched turned to gold (or platinum), and with each release, their musicianship and songcraft accelerated at an alarming pace, constantly challenging the status quo and pushing the three-chord confines of rock music.

Fifty years ago today, however, the Beatles forever reshaped the popular music landscape when they released Sgt. Pepper in the United Kingdom.

John Lennon, Paul McCartney, George Harrison, and Ringo Starr flirted with more sophisticated song composition and whimsical drug references on Rubber Soul, and on Revolver they incorporated the classical Indian sounds with which Harrison had grown so enamored studying sitar under the world-renowned Ravi Shankar. Yet both records merely hinted at the massive sonic and aesthetic overhaul the band would soon undergo, capturing the cultural zeitgeist of the late ‘60s as we remember it today.

For all its accolades, the greatest argument for Sgt. Pepper’s enduring relevance is the frequency with which young people still listen to it.

New statistics show that just over half—precisely 50.1 percent—of all listeners who stream Sgt. Pepper on Spotify are under the age of 40, meaning they were likely first exposed to it by members of their parents’ or grandparents’ generations. The Beatles withheld their catalog from the streaming platform until Dec. 24, 2015. Since then, Sgt. Pepper’s tracks have graced more than 1.7 million active Spotify playlists, performing particularly well in Mexico (no place listens to it more than Mexico City), the United States, Chile, Argentina, Brazil, and, of course, Great Britain.

“Lucy in the Sky with Diamonds” leads the pack for individual song streams, followed by “A Day in the Life,” “With a Little Help From My Friends,” “Sgt. Pepper’s Lonely Hearts Club Band,” and “When I’m Sixty-Four.”

These statistics quell any doubts whether Beatlemania still exists today. It is reasonable to project that as long as popular music as a whole exists, the Fab Four will continue to thrive among new and old listeners. And that’s great, because Sgt. Pepper remains a game-changing epic.

So massive was the shift, in fact, that the band, at McCartney’s behest, adopted an alter ego under which to release the music. His self-referential howl about “the act you’ve known for all these years” is the only legitimate evidence of the so-called “concept” tying each of the album’s 13 tracks together. Otherwise, the primary unifying factor on Sgt. Pepper is how boldly and convincingly it hops between genres: the bombastic arena rock of the title track, the sugary psychedelia of “Lucy in the Sky with Diamonds,” the music hall art-pop of “When I’m Sixty-Four,” and the cavernous, orchestral exclamation point rounding out the album, “A Day in the Life.”

The New York Times lauded Sgt. Pepper as “a new and golden Renaissance of Song” upon its release. Timothy Leary deemed the Beatles “prototypes of evolutionary agents sent by God, endowed with a mysterious power to create a new human species.” In one fell swoop, the quartet defined and soundtracked the “Summer of Love,” the Haight-Ashbury hippie movement whose peace and love agenda was doomed to fail in the short-term, but has subsequently been immortalized in popular music discourse. Sgt. Pepper has since inspired landmark releases from Pink Floyd and Radiohead to Kendrick Lamar and Kanye West.

Fifty years ago today, McCartney asked, “Will you still need me, will you still feed me, when I’m 64?” As the “cute Beatle” approaches his 75th birthday, the answer is “Yes.”