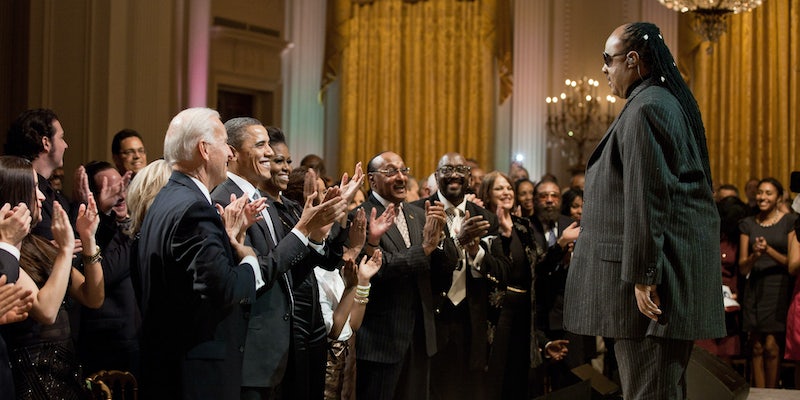 He's uniquely qualified for the position.

Despite hints about his post-White House plans, President Obama already has a new, specifically tailored job offer on the table.

Last week, Obama joked with former Swedish ambassador Mark Brzezinski about his upcoming job search, telling him, “I’m still waiting for my job at Spotify” and noting that he’d be a good fit for the Swedish company “‘cuz I know y’all loved my playlist.”

Obama has teamed up with Spotify over the past few years, giving Americans (and music lovers around the world) a glimpse into his wide-ranging music tastes. His playlists are full of dad pop, heart, and enough nuggets to do a proper deep dive. And after hearing about Obama’s comments, Spotify founder and CEO Daniel Ek had just the job opportunity for him. He didn’t offer the outgoing president a position outright, but he did give him the chance to apply for the job of “President of Playlists.”

Hey @BarackObama, I heard you were interested in a role at Spotify. Have you seen this one? https://t.co/iragpCowpO

The job listing, which is viewable on Spotify’s website and not a real listing, doesn’t mention Obama by name, but taps into some of his rhetoric in the description, such as Spotify being “full of hope, and always open to change.” If that wasn’t apparent, the job qualifications are highly specific for a position geared toward overseeing its music curation and playlists team. For instance, the ideal candidate should be able to curate a “warm-up playlist for addressing the nation about health care legislation that bears your name.”

Spotify is also looking for someone who has eight years experience of running a respected country, knows artists and musicians, has a Nobel Peace Prize, has incredible public speaking skills, and has the ability to work under mass public scrutiny.

The “Apply Now” links to an actual Spotify application, and while Obama is probably one of the only people qualified for this tailored job, Spotify forgot to list his biggest on-platform accomplishment: He outdid Spotify’s official Netflix and Chill playlist without even trying.