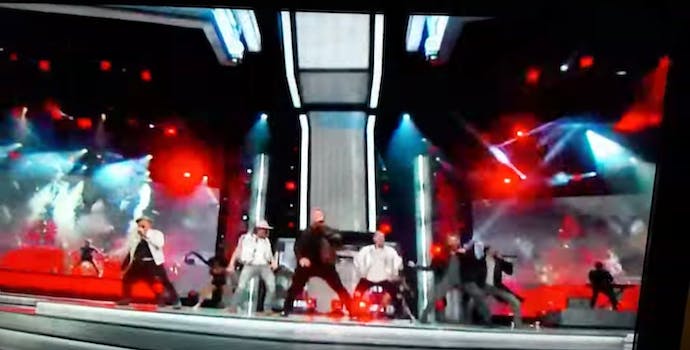 The '90s boy band had the biggest performance of a country music show.

A thing you may not have known was that last night was the Academy of Country Music Awards, the country music equivalent of the Oscars.

Another thing you may not have know is that one of country music’s biggest sensations, Florida Georgia Line, has a new collaboration out with ’90s boy band sensation the Backstreet Boys, called “God, Your Mama, And Me.”

A third thing that, if you were unaware of the previous two statements, you definitely did not know is that Florida Georgia Line and the Backstreet Boys were slated to perform their new hit at the ACM Awards last night.

However, what you most certainly deduced by now, is that while up on stage, the Backstreet Boys busted out their biggest hit, ‘Backstreet’s Back’ and every single person on the face of the entire planet lost their nostalgia-loving minds.

Because how could you not?

Seeing country stars rocking out to the @backstreetboys was by far the highlight of my night #ACMAwards #ACMs pic.twitter.com/9xTHu7paHv

Everyone in the T-Mobile Arena in Las Vegas lost their mind.

Backstreet Boys with Florida Georgia Line tonight at the ACMs! One of the best things I've ever seen live! #ACMawards2017 pic.twitter.com/CjhT93UAtF

In fact, the only person who didn’t lose their mind last night was you, but that’s only because you didn’t know.