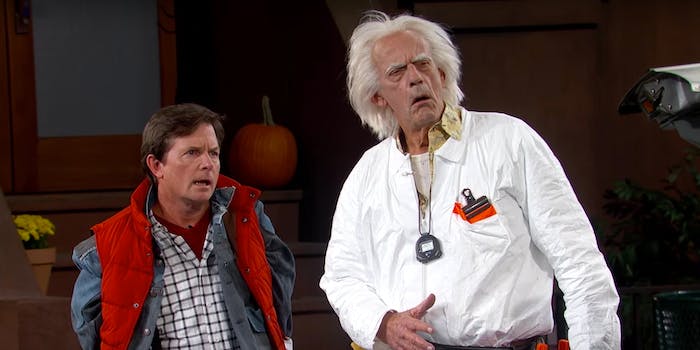 Doc Brown and Marty McFly weren't expecting 2015 to look like this.

Doc Brown may want to recheck his calculations.

The doctor’s DeLorean time machine may have been destroyed in Back to the Future Part III, but Christopher Lloyd and Michael J. Fox reunited once again for a journey to Back to the Future Day (which they would simply call Oct. 21, 2015).

But instead of Hill Valley, California, they somehow ended up on Jimmy Kimmel’s temporary stage in Brooklyn. As you can imagine, they were a bit disoriented to discover how different things were from the 2015 they previously visited.

Based on this backstage photo, it appears that Doc Brown also traveled to November 2016 to learn the results of presidential election.

Tell me, future boy, who's President of the United States in 2017?
"Bernie Sanders."
Bernie Sanders?! From Vermont? pic.twitter.com/saXRY3aguV

No word on whether this is still our timeline or an alternative one.