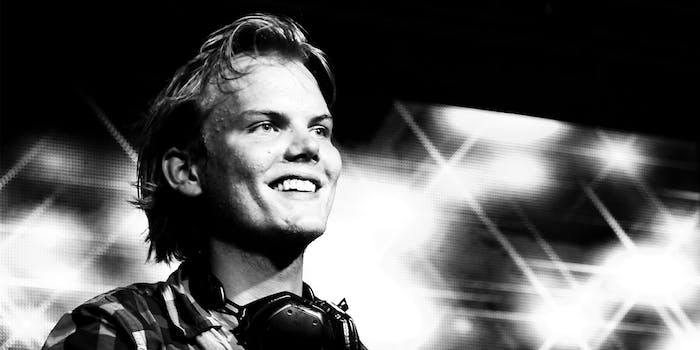 Calvin Harris, Imagine Dragons, and others have posted tributes.

Musician and producer Tim Bergling, also known as Avicii, died on Friday at the age of 28.

According to a statement from his rep, Bergling was found dead in Muscat, Oman, on Friday afternoon. A cause of death has not yet been given.

The Swedish DJ and producer was one of the figureheads of contemporary EDM, crossing over with 2011 hit “Levels” and collaborating with David Guetta and Coldplay. The 2015 Mike Posner hit “I Took a Pill in Ibiza” references Bergling in the first line: “I took a pill in Ibiza/To show Avicii I was cool.”

In 2016, he announced he was retiring from performing live, citing that he was doing it for his health. He was hospitalized for acute pancreatitis in 2012 and his appendix and gallbladder were removed in 2014. “This was obviously the hardest decision of my life so far,” he told Billboard in 2016. “But so far it has paid off tremendously in terms of well-being for me.”

Last year he posted to his website, saying that while he wasn’t performing he was still in the studio: “The next stage will be all about my love of making music to you guys. It is the beginning of something new.”

His contemporaries have been offering condolences and tributes.

Devastating news about Avicii, a beautiful soul, passionate and extremely talented with so much more to do. My heart goes out to his family. God bless you Tim x

At a loss for words…Rest easy brother 😪 @Avicii

devastated at the news of @Avicii passing. working with him was one of my favorite collaborative moments. far too young. the world was a happier and fuller place with his presence and art. sending all my love to his friends and family. Xxdr

. @Avicii was talented and kind, and I was genuinely excited to see what would come next from him. His future most certainly should have been written beyond age 28. I am
heartbroken.
Rest easy Tim.