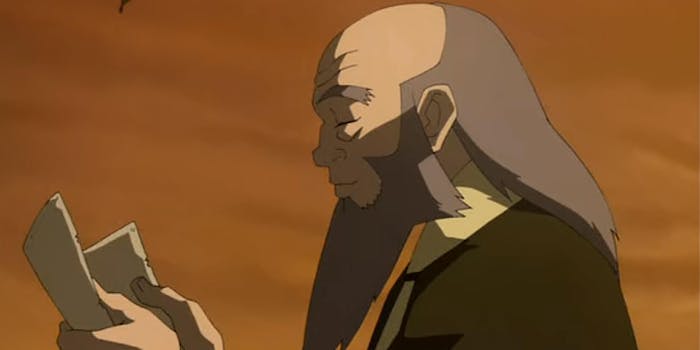 Revisiting ‘The Tales of Ba Sing Se,’ the best episode of ‘Avatar: The Last Airbender’

This slice-of-life episode encapsulates the brilliance of ATLA's thoughtful characterization.

Our favorite TV episodes have as much to do with memory as artistic quality. We’re always more likely to remember the big, emotional moments: the death scenes, the important kisses, the episodes that break away from a show’s typical format. “The Tales of Ba Sing Se” is one such episode, encapsulating all of Avatar: The Last Airbender’s strengths in a succinct anthology of super-short stories. It’s a tempting choice to recommend to new viewers, but really it’s much better off in context, building on a season and a half of slow-burn character development.

Airing almost exactly halfway through ATLA‘s 61-episode run, “The Tales of Ba Sing Se” offers a reprieve from one of the darkest periods in the show. Team Avatar have been separated from Appa the flying bison, a heartbreaking storyline that illustrates how powerless the heroes can be. Without Appa, they can’t travel long distances unaided. And Appa, Aang’s innocent and loyal companion, is totally unprepared for the cruelty of his captors. So when Aang and his friends finally arrive in Ba Sing Se, we’re torn between the emotional urgency of finding Appa and the importance of their over-arching quest to defeat the Fire Nation.

“The Tales of Ba Sing Se” arguably works best as a two-parter, following the Emmy-nominated “City of Walls and Secrets.” After more than a season of foreshadowing, the name “Ba Sing Se” has gained an almost mythic quality to the audience. We don’t know what to expect, other than the fact that Ba Sing Se is big. The walled city is the most impressive location we’ve seen so far: the stronghold of the Earth Kingdom, the only viable opposition to the Fire Nation’s military power. Team Avatar’s childish antics are instantly dwarfed by Ba Sing Se’s size and complexity, an impenetrable bureaucracy where citizens are brainwashed to ignore the war outside. If you’ve seen ATLA, you’ll never forget the motto of the city’s secret police, the Dai Li: “There is no war in Ba Sing Se.”

ATLA’s political worldbuilding is so organic it feels almost effortless, helped along by the main characters’ naivety. Toph, raised by overprotective aristocrats, is the only one to even vaguely comprehend Ba Sing Se’s rigidly structured society. Their eerily cheerful tour guide points out the neighborhood where “people who work with their hands” live separately from the upper classes, but the kids see it for what it really is: a walled-off enclosure for poor people and refugees, enforcing Ba Sing Se’s denial of the war.

With Team Avatar forced to stick around until they find Appa, “The Tales of Ba Sing Se” explores a day in the life of each main character. Aang frees a bunch of animals from a zoo. Toph and Katara go to a spa, an unlikely bonding moment for two characters who usually rub each other the wrong way. Sokka gatecrashes a poetry club, a classic example of him being simultaneously smart and a doofus. (“That’s one too many syllables there, bub,” grunts the poetry club’s bouncer, riffing off the absurd idea of Haiku Police.) They’re charming, funny little stories that build on thoughtful characterization, but the episode’s best segments go to Momo (an animal-POV adventure where he searches for Appa), Zuko, and Uncle Iroh.

Hiding in the city for different reasons, this is a turning point in Zuko’s slow path to redemption. While Team Avatar are used to having fun between adventures, Zuko refuses to chill out for even one second. He’s obsessively goal-oriented, constantly angry, and clearly believes that relaxation is a sign of weakness. Working in a tea shop with Uncle Iroh, this is the first time he’s taken a break and lived anything approaching a normal life.

We tend to focus on big, flashy scenes when discussing redemption arcs: the moments where a former villain chooses self-sacrifice over cruelty, or actively atones for past mistakes. And sure, Zuko has those moments, too. But the reason why his arc works so well is that it doesn’t just focus on the war. Like Aang and his friends, Zuko is sometimes just a kid, shaped by his unique upbringing as a Fire Nation prince. His hatred of emotional vulnerability is partly due to his father’s strict expectations, but it’s also pretty normal for an awkward teenage boy, highlighted in this episode where he goes on a date with a random Earth Kingdom girl.

The Earth Kingdom’s brainwashing may be more explicit, but Zuko was shielded from reality in a different way. As Ozai’s heir, he mostly interacted with soldiers and members of the royal court, emphasizing military strength over social skills. It just isn’t natural for him to socialize with strangers or even speak to civilians as equals, in the same way that it does feel natural for Aang to make friends everywhere he goes. So the first act of his redemption arc is less about weighty moral decisions, and more about the realization that there’s another way to live. Uncle Iroh uses this involuntary vacation to his advantage, encouraging Zuko to just… be a person. It’s a lesson that Iroh demonstrates himself every day.

Iroh’s five-minute tale is the most memorable of all, dedicated to voice actor Mako Iwamatsu, who died before the episode aired. At first, it’s more of a slice-of-life-montage than the others, following Iroh around Ba Sing Se as he buys a picnic for a “special occasion,” sings to a crying child, and gives a pep-talk to an incompetent mugger. Little snapshots of him being a sweet old man. Then in the final scene, we learn what the special occasion is: A lonely memorial for his long-dead son. His song “Leaves from the Vine” suddenly takes on a tragic new meaning, with lyrics about soldiers returning home from war.

Iroh often acts as Zuko’s comic relief, but this episode shows his role in a new light. As the brother of Firelord Ozai (not to mention a celebrated military leader), you can imagine an alternate timeline where Iroh leads a rebellion against Ozai’s despotic rule. He’s obviously a better person, always striving to be kind to others. He certainly doesn’t approve of the way Ozai raised his children. But instead of taking an aggressive stance in the war, Iroh quietly dedicates himself to protecting Zuko. “The Tales of Ba Sing Se” reveals the foundation of his motives: Iroh will do anything to avoid losing another young man like his son.