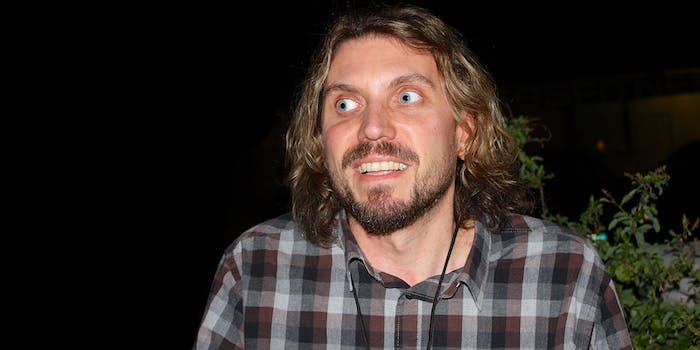 Andreas Schmied, short on marketing dollars and long on ambition, turned to the only promotion tool available.

As the credits for his film Taking It Back rolled at the Austin Film Festival, filmmaker Andreas Schmied rose from his seat beaming from ear to ear.

The road from writing and directing his first feature, a commercial success in his native Austria, to being featured at a popular film festival, was one partially fueled by Schmied’s strong social media presence. Using YouTube, Twitter, and Facebook to promote himself and reveal his strong, politically charged personality has not only led to a dedicated following, it’s made him a community-building maven in Austria. But being a social media guru is not always easy for folks whose talents are geared to the arts.

“I picked up social media skills with the release of my movie,” Schmied told the Daily Dot. “Since it was seen as new ground in Austria, the government made a panel and invited me to speak about it. It was to tell others what new resources they had to connect to others.”

As an up-and-coming filmmaker, short on marketing dollars and long on ambition, Schmied knew that it was crucial to build a community to spread the word about his film in order to gain traction when it debuted in 2013. He had toyed with social media in some of his previous work as an editor, but it was well before the era of Facebook and Twitter.

Schmied plan was to slowly build. “I started to vlog, tweet, and post on various websites,” he said. “I started to get in touch with the community, and it worked because we became the second highest grossing movie in Austria last year. Also, the movie took fourth place on iTunes. I think this was due to the social media work I did.”

Of particular interest is the filmmaker’s YouTube page. While he does not have thousands of followers to his credits, his fans are loyal. Schmied has a knack for turning a quick phrase—even in English—and his clips go a long way to reveal his outgoing, quirky personality. For example, if you want to hear one man’s captivating story on how a young person from a small blue-collar town in Austria goes from hobbyist to being featured in a notable film festival, this is worth a view.

“The first thing that has happened is that my attention span became much shorter because of editing my first little vlog,” said Schmied. “After a time, you develop a technique where you try and speak fast enough and edit the pause out because want to razzle-dazzle them.”

That razzle-dazzle is clearly evident in his Austin Film Festival entry, Taking It Back, a delightful rom-com against the backdrop of rural Austria. The film’s pace is quick, and its character development is as fast and as facile as any video project made for Web distribution. This technique will work well for future projects Schmied plans to make directly for Web viewing.

Schmied’s mastery of social media—perhaps born out of the necessity to gain traction in a competitive market—is not a common trait among indie filmmakers, writers, and actors. Robert Campos and Donna LoCicero, the filmmakers behind the documentary 3 Still Standing, used Kickstarter to fund a portion of their film and found the need to master the perplexing interacties of social media channels a challenge. As with other filmmakers who have gone the crowdfunding route have learned, without an understanding of social media, raising money on these new platforms can be the proverbial tree falling in the forest.

Actor/writer Steven Molony, star of the indie film Efficiency, understands the power of social media, but recognizes that building the proper public-facing channels would require the sort of resources he currently lacks. He points to the film Dear White People as a textbook example of building an audience because of the significance of the message. Molony would like to follow suit some day when he has the time and money. How would he characterize his social media stance at the moment?

“I like to call it a work in progress,” said Molony with a laugh.