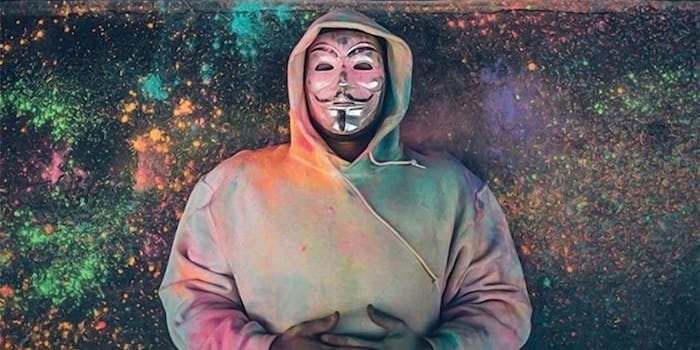 ‘Anonymous’ Instagram poet Atticus is taking us for a ride

The mysterious writer just released a new book and has thousands of fans, but his work is painfully mediocre.

Everyone apparently loves Atticus, the “anonymous” Instagram poet whose fans include Emma Roberts and Karlie Kloss. Atticus (in photos and videos he appears to be male, but has never divulged an identity) has more than 800,000 followers on the platform, where he posts short poems and observations on life. They’re framed like inspirational posters, and they’re wildly relatable to his followers.

This post received more than 20,000 likes, even though it is freshman-dorm corny. Atticus, who has been called  “poetry’s answer to Banksy” (no) and “Byron for the Instagram generation” (what?) released his second book this week, The Dark Between Stars, filled with similarly pithy content, focused on love and relationships. Atticus, who apparently splits time between Los Angeles and Canada, conceals his identity in photos and in person with a Guy Fawkes mask, because “No fame is the new fame.” (We’ve reached out to Atticus for comment.)

If Atticus is trying to say something about fame, he doesn’t dig in too deep on Instagram. When his first book, Love Her Wild, was released last year, he offered Teen Vogue a vague origin story: “Three years ago, I was in France. I happened to meet a gentleman [who] told me, ‘You have an opportunity to do a lot of good with words.’ I thought that was interesting, and he just left that with me. I was in Paris after that, and I just started writing [poems] on my phone. Then I was like, ‘You know what, I’ll post. I’m gonna write anonymously. There’s no risk in it.’ I never expected them to kind of take off the way they did.”

The “no risk” part is interesting. The more you sift through Atticus’ musings, the more it seems like the Etsy/Pinterest aesthetic is no coincidence. Google his poems and Pinterest is often the first result. Another post about soulmates sounds like it was a musing plucked from Twitter, and there are a couple of tweets with the same wording, but it’s also shown up in Atticus’ feed a few times.

Instagram and Twitter are prime platforms for lifting memes and jokes and reappropriating them without credit, and the poetry world is ripe with plagiarism, but the coffee mug-ready, quote-generator feel of Atticus’ inspirational blurbs makes ownership a little murkier. One of his most popular lines—”Love her, but leave her wild”—has been attributed online to To Kill a Mockingbird, perhaps because of the character Atticus Finch, but Atticus’ work is so general and voiceless it’d be easy to shell-game some words around and call it new. Another poem from Love Her Wild has been compared with a Kinky Friedman quote, which has long been attributed to Charles Bukowski: “Find what you like and let it kill you.” (There has been some variation in the quote, however.)

Like many poets before him, Atticus’ poems often focus on women, and it’s no coincidence that women make up a good part of his fanbase. He’s giving them something they find inspirational. But there’s something troubling about the presentation. Here is a man (with sick abs?) who rides motorcycles and drinks whiskey and types on a typewriter but is still in touch with “the power of the female spirit,” as he told the Vancouver Sun last year. Many women have gotten his words tattooed on their bodies. Tellingly, when the CBC asked for five books that inspired him last year, he listed all male authors.

Teen Vogue asked about this fixation on women and “brokenness,” too: “I don’t want to idolize or romanticize brokenness. But I do want to bring light to the fact that we are all kind of broken in our own way, but that doesn’t mean we are not beautiful in our own way. I think there’s so much pressure in our world to be happy and to be perfect. That’s just not how we are designed. That’s just not a reality.”

Atticus can’t truly speak about women’s experiences, but he certainly knows how to market platitudes to them: His merch store includes a $174 necklace and $60 hoodie. Last year, another Instapoet who writes from the female perspective, r.h. Sin, was called out for using women’s experience in his work, and replied by calling his critics “half-witted.” In 2017, another whiskey-obsessed Instapoet, Collin Yost, was called out for his poetry, but the incident appeared to net him more followers. He now writes poems about conspiracy theories, but last month he took a shot at Atticus, and alluded to plagiarism and “Literary theft sold to millions.”

Last year, Instapoet Rupi Kaur’s 2016 collection Milk and Honey was turned into a meme. And accounts are now satirizing this Instaprose, like poet Thom Young, who co-wrote the book Instapoet. He told PBS last year: “I think the younger generation is mostly interested in ‘fidget-spinner’ poetry. Like they’re just scrolling on their devices, to read something instantly, while the libraries are empty. I think people today don’t want to read anything that causes a whole lot of critical thinking.”

Michelle Dean, writing for the Guardian in 2016 about the new wave of Instagram poets, hit on something about Atticus’ feed: “As I read hundreds of poems, I began to wonder if there was something more like an algorithm than a person behind them. The emotions seemed real enough, but there was little sense of voice, only a very good understanding of what his readers wanted to hear and know about their inner lives.”

And that kind of calculation might not seem risky to Atticus. But a mask only hides so much.