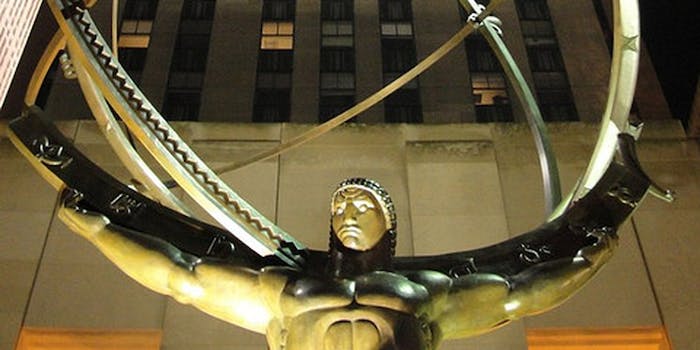 The painful irony of the ‘Atlas Shrugged’ film Kickstarter

It's what Ayn Rand would have wanted.

In keeping with the staunchly individual-oriented nature of Ayn Rand’s objectivist philosophy, the producers of the flop films Atlas Shrugged: Part I and Atlas Shrugged: Part II, based on the first two-thirds of one of Rand’s thick hymns to capitalism, have decided to pull themselves up by the bootstraps in financing the not-at-all-anticipated final installment.

How? By asking strangers for money online.

The Kickstarter campaign, messily titled ATLAS SHRUGGED Movie “Who Is John Galt?,” has set its goal at $250,000, and with 28 days to go, it’s attracted 450 backers, almost cracking the $100,000 threshold in the process. Five people have already donated $10,000 apiece, which will get them an invite to the premiere, but tellingly, no one has shelled out $5,000 in order to be an extra in the film—there would be no recovering from such embarrassment.

Randians like to tout the wisdom of the free market, but they seem oddly unwilling to face the reality of the numbers thus far: About $50 million went into the first two Atlas Shrugged movies, which grossed all of $8 million combined. That could be why producer John Aglialoro, CEO of fitness equipment manufacturer Cybex, who has owned the rights to the novel since 1992, decided to stop bankrolling the project with his own money—no matter how he praises it in a video plea for cash (the production values of which should make any potential “investor” think twice).

The pitch even includes a canned response to the inevitable accusations of hypocrisy. In the FAQ section, we get an answer to the question “Isn’t asking for charity antithetical to Ayn Rand’s philosophy?”

Ayn Rand had no problem with someone giving money to a cause they care about. If someone deems a cause worthy and wants to donate money, they should be free to do it. What Ayn Rand had a problem with is altruism for the sake of altruism as a moral duty, or being compelled, or forced, to “give.” The Atlas Shrugged Kickstarter campaign is of course a voluntary value-for-value exchange. You are not obligated to contribute.

I should hope not, especially given that this $250,000 they’re after is but a part of the movie’s allegedly $10 million budget (information buried at the bottom of the page, incidentally). What are they spending this bonus couple hundred grand on? My guess is a fully CGI John Galt.

Producer Harmon Kaslow doesn’t seem to think they’ll need to spend much on marketing, anyway. In a bizarre comment to The Hollywood Reporter, he noted that there’s “an incredible amount of vitriol out there and we have every intention of capitalizing on it this time around. The day we launch the Kickstarter campaign those haters are going to come alive. They’re going to come after us in droves, attacking us everywhere online. To them, we say, thank you.”

If Kaslow really thinks that this is a case of “no such thing as bad publicity,” he must have a rather selective memory. But as far as ridiculing his godawful, unpopular, amateurish films goes, hey, I’m happy to help. I don’t expect to show up in the credits, however—that costs $1,000.