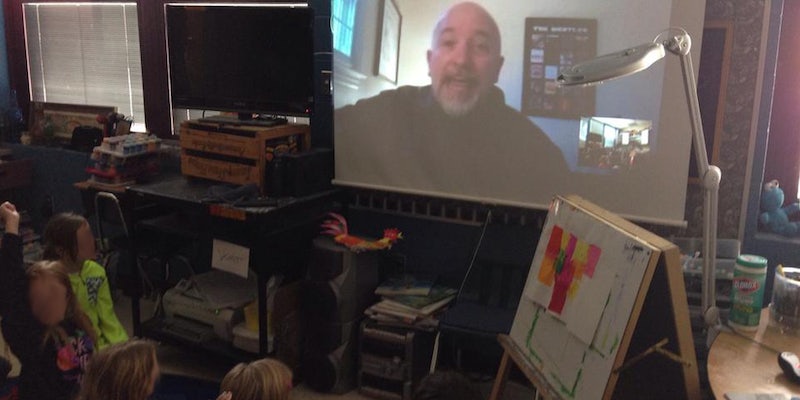 The soundtrack from Frozen only gets you so far.

As the South recovers from an unexpected snowstorm that left thousands of passengers and schoolchildren stranded overnight on highways and in schools and politicians apologizing left and right, one musician has plenty of reasons to be happy.

When impossible traffic jams due to the snowstorm made roads nearly impassible in Atlanta and other regions throughout Georgia and Alabama, teachers spent Wednesday evening with the problem of how to shelter hundreds of students who wound up spending the night in their schools.

But one regional musician, a family entertainer named Roger Day, got creative and connected with hundreds of school children in their classrooms during the slumber party. Day used Skype to put on a virtual concert for schools who were scrambling for ways to entertain their students overnight.

“You played for my kids school today and they are now sitting at our dinner table singing about Rhinos and making kissing sounds,” Tuscaloosa teacher Leslie Marriner wrote on Day’s Facebook page Wednesday night, after Day posted about doing the first of what he called “Skype-certs.”

In Hoover, Ala., Greystone Elementary School uploaded a picture of Day performing for a classroom full of children to Facebook. That photo quickly landed on Imgur and made the front page of Reddit. Day, a resident of Franklin, Tenn., responded to the sudden fame in good humor:

“The bizarre world of social media. My son just called from VA saying all his college friends said I was the #1 post on Reddit. Wow! Some of the comments are a little, well, interesting. But I’m told this is a big deal.”

Day is a touring musician who performs fun songs about nature for elementary school children. Among his big hits are “Mosquito Burrito,” “There’s an Alligator Raiding my Refrigerator,” “Monkey Brains,” and “It’s a No No to Kiss a Rhino.”

Although we weren’t lucky enough to get a special free Skype concert from Day in our own homes, you can still sing along thanks to the wonders of the Internet:

Roger Day: “I Love to Study Mud” from Chalkhill Productions on Vimeo.