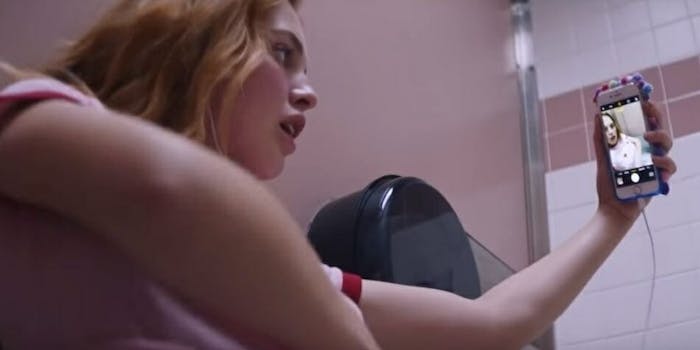 'We knew that this film was a stick of dynamite.'

The new indie film Assassination Nation takes on the destructive culture of social media under the guise of a modern-day witch hunt. But some of the biggest tech giants are reportedly refusing to show clips of the movie.

According to Neon, the film label that purchased the film for distribution, Facebook, YouTube, and Instagram have declined to allow clips to be played on their platforms because they violate their terms of service.

Christian Parkes, the chief marketing officer at Neon, told Variety that the social media companies wouldn’t showcase the trailers because one showed the girls in the film pointing guns at the camera and another showed a woman flashing her bra. Parkes said he was informed that showing guns would have been OK as long as they weren’t pointed at the camera. He also said women in underwear would have been fine but the actual act of undressing was disallowed.

As of Friday, though, there were trailers for the movie on YouTube available to watch, including one that has more than 450,000 views.

“We knew that this film was a stick of dynamite,” Parkes told Variety. “We didn’t want to dress it up into something it isn’t. This isn’t a feel-good coming-of-age story. It’s an honest meditation on where we are as a culture …

“We’re not depicting a sanitized world. We’re making a movie about strong young women. People feel threatened because it is honest.”

The film, which has a 64 percent rating on Rotten Tomatoes, is about a data hack that uncovers the secrets of the town of Salem. After the town implodes in anger and fear, four girls who are obsessed with social media and who don’t object to using violent means to accomplish their goals try to save a community that’s ready to destroy itself.

Neon also couldn’t compel any billboard companies in Los Angeles to show an ad for the film that contained the phrase “Ass Ass In Nation.”

“They thought it was a political ad calling for violence or that it was just plain offensive because it had the word ‘ass’ in it,” Parkes said.

Considering the film—which opened Friday—is targeting a younger demographic, the social media blackout is probably hurtful. Wrote Variety: “‘Assassination Nation’ is primarily aimed at audiences under the age of 25, and they aren’t watching a lot of television. In order to reach them, the studio needs to do most of its marketing online.”

Without that social media marketing reach, the film is predicted to bring in $4 million during its open weekend, according to the Hollywood Reporter.

“Several ads were rejected for violating our advertising policies, including some for the use of profanity,” the spokesperson said. “Overall, the page has successfully run hundreds of ads over several months, with only a fraction of ads disapproved—many of which were rejected in error and have since been overturned.”