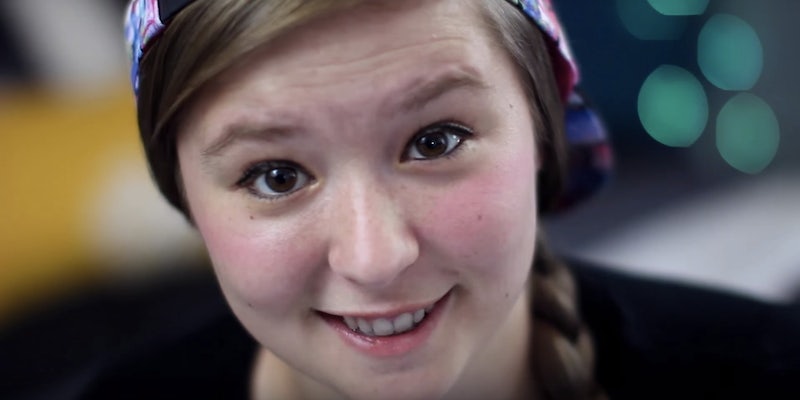 She’s the proudest, loudest voice from Little YouTube, and she’s just getting started.

This isn’t the first time I’ve written about Ashley Mardell. Long before there was the Daily Dot’s #WCW column, there was a show called YouTube Nation. As that show’s curator, I spent hours scouring the Web for passionate, articulate women to highlight and help disprove the theory that YouTube is entirely cat videos and fail compilations. And in my years with the platform, I’ve found many, many examples of this type of woman. But few are as consistent and special as Ashley Mardell.

Starting her channel in 2009, Mardell has built an archive of creative, discussion-focused videos that matter. Little YouTube vs. Big YouTube, the ABCs of LGBT, stereotypes, gender and sexuality, coming out, relationships, depression: Mardell’s content is a series of honest letters to her thousands of subscribers. She first gained notice online after collaborating with Hannah Hart in 2013 during Hart’s My Drunk Kitchen national tour, and from there, Mardell wowed fans with the level of detail each of her videos presented. With stop-motion, props, and collaborations from around the world, Mardell has never cared about being “YouTube famous” but instead, makes the platform a more inclusive place.

Through YouTube, Mardell has spent years creating personal (often educational) videos for and with members of YouTube’s LGBT community. Her series The ABCs of LGBT moves through the gender and sexuality spectrum as Mardell and other LGBTQ YouTubers share their own experiences. These videos are educational for all, but they’re especially important for LGBTQ individuals looking for information to support or explain their own identities. For young fans who can’t get an education on sexuality in school, this content is even more of an asset.

She’s talked about coming out, educated others on how to be an ally, and recently, shared with the world her love for her girlfriend Grace, a now-permanent partner on the channel and in our hearts. Three months ago, Ashley released her first video discussing her depression, further working her magic of creating dialogue around “taboo” topics.

Ashley Mardell, I’m raising a beer to you. Thank you for reminding us to be brave in our own way, to listen to others even when we might not understand them at first, and to always always be open to love.