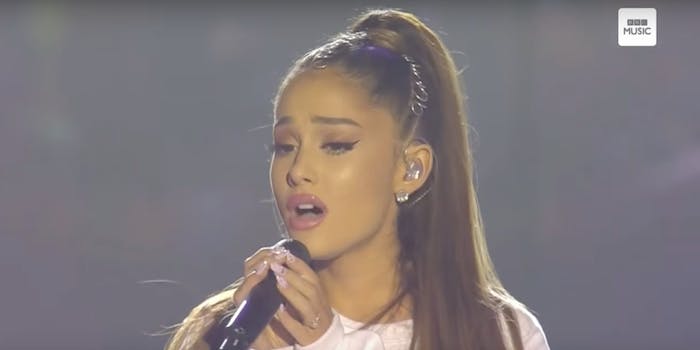 She's coming to his defense.

Ariana Grande fans seem to be turning on the singer’s fiancé, SNL star Pete Davidson, just weeks after the couple announced their surprise engagement. Now she’s coming to his defense.

Grande supporters are bringing up a joke Davidson made after her concert in Manchester was bombed and 22 bystanders were killed in May 2017. Davidson was criticized for the joke at the time, which he claims was taken out of context.

According to the Mirror, Davidson quipped at a 2017 standup performance that “Britney Spears didn’t have a terrorist attack at her concert,” when discussing Grande’s massive popularity.

Grande is defending her future husband—the couple made their engagement official in early June—and justifying her decision to not hold the joke against him, tweeting her explanation to an upset fan.

Wrote Grande: “[T]his has been v tough & conflicting on my heart. he uses comedy to help ppl feel better ab how f-ed up things in this world are. we all deal w trauma differently. I of course didn’t find it funny. it was months ago & his intention wasn’t/ is never malicious but it was unfortunate.”

Grande has spoken at length about the tragedy in Manchester and in an interview with British Vogue admitted that she suffers from post-traumatic stress because of the ordeal.

The 25-year-old said in the piece that her “anxiety has anxiety” and that she’s always been an anxious person but when she returned home after the incident, it was “the most severe it’s ever been.”