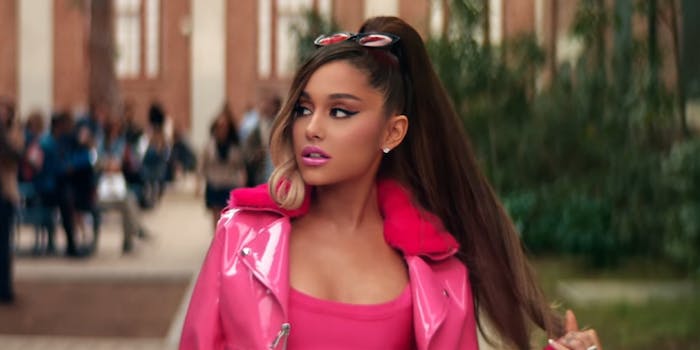 Ariana Grande is here to distract us from beef.

Two weeks after breaking the internet with the video for “Thank U, Next,” Ariana Grande has released another single, “Imagine,” and those four notes at the end have fans switched on.

Grande teased the new single on Thursday night, while multitasking. She also referenced the Drake-Kanye West Twitter drama that started yesterday, tweeting, “guys, i know there are grown men arguing online rn but miley and i dropping our beautiful, new songs tonight so if y’all could please jus behave for just like a few hours so the girls can shine that’d be so sick thank u.”

It’s a hypnotic slow jam, and some are already speculating that it’s about the late Mac Miller, but the whistle notes at the end have people screaming, crying, unable to breathe.

Raise your hand if you were personally victimized by the whistle tones at the end of imagine | @ArianaGrande #Imagine pic.twitter.com/ksLcJi5a4s

Of course, there are entire compilations of Grande’s high notes on YouTube, but this one has been anticipated.