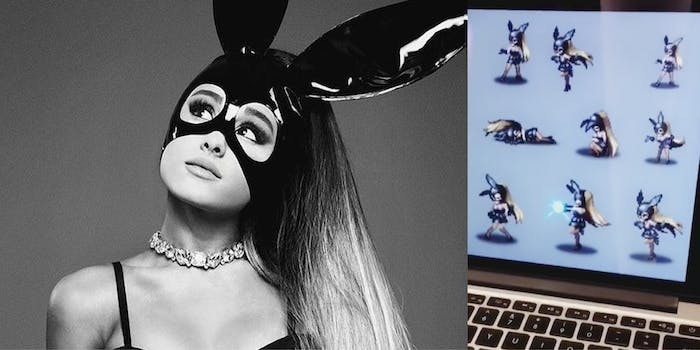 Ariana Grande is getting her very own ‘Final Fantasy’ character

We can all be a 'Dangerous Woman' now.

Ariana Grande is on her way to becoming a quadruple threat with her latest social media announcement.

On Sunday, Grande revealed via Instagram that she’s getting her own guest character in the Final Fantasy mobile game Final Fantasy: Brave Exvius. Her character, named DW, resembles the outfit she wears on her Dangerous Woman cover, bunny ears and all.

Grande’s followers are already hyped for her gift to Final Fantasy and her own stans alike.

arghhh 2017 is already gonna be a good year for you

Released in Japan in 2015 and North America this past June, Brave Exvius is a turn-based role-playing game in which users can play as various characters from the video game series.

Hopefully DW’s skills, such as fighting with music notes, can shut down even the most ardent of Brave Exvius bosses, much like Grande to sexist objectifiers last week.