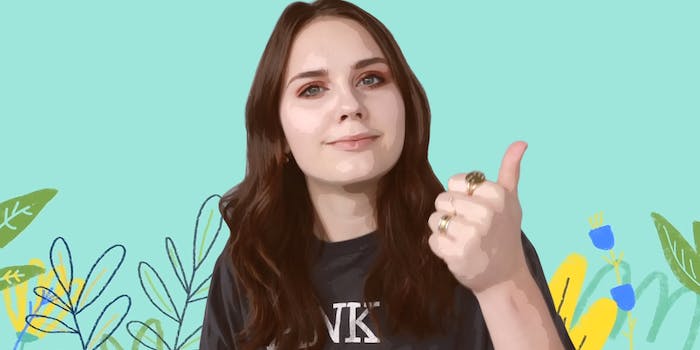 Sometimes you fall down the YouTube rabbit hole far enough where you encounter a new vlogger who just gets you. It’s like meeting a new friend.

You click, you’re hooked, and two years later you’re still nodding in agreement at a video titled “Why Small Boobs Are Awesome.” For me, one of these gems has been Arden Rose, a 21-year-old vlogger who is proving that women on YouTube don’t have to do just one thing.

Arden began making YouTube videos in 2008 and over the next four years of high school, made a solid name for herself within the growing beauty and lifestyle community. Originally inspired by her then-best friend, Arden found YouTube to be a place where she could engage in all of her passions in a creative way, ranging from gaming to fashion. But after her friend moved, YouTube went from being a shared hobby to a high school backbone that helped her get through the rough patches of alienation and isolation.

At 18 Arden decided to postpone college and moved from her hometown in Arkansas to Los Angeles, going all in on YouTube.

Since then Arden has not only flourished but evolved her channel into a space far beyond makeup hauls. In the last two years, Arden has diversified her videos into chats about body image, sex, relationships, feminism, and even opened up about her battles with obsessive-compulsive disorder and trichotillomania.

She still treats her 1.4 million subscribers to lifestyle videos, but no one does it quite like Arden. She’s a straight-up pal. She’s quirky and self-deprecating, but in a way that doesn’t compromise her self-confidence. She’s honest about her relationship with herself and other people, and by talking about her own body, has made her viewers confident to talk about theirs.

I find myself drawn to Arden both for the things we share—our love of literature, her badass bangs, and love of whimsical clothing—and the things she reminds me to be more of: confident, creative, light. Arden is proof that “empowered women empower women.”

Last year she broke out. She added high-quality short films to her channel, including “I Just Threw This On” (a classic) and the hilarious trailer for her book Almost Adulting, out March 28. She starred in two webseries, Mr. Student Body President and Guidance, and debuted her own pilot with New Form Digital, Occupy Alice. As IndieWire wrote last month about Guidance:

“While many YouTubers have found the jump to acting elusive, Rose’s easy onscreen persona and sarcastic charm have served her well in two key roles. Young people looking to Rose as a role model are in good hands.”

This year I hope we get more worldly adventures with her boyfriend of two years, fellow YouTube filmmaker Will Darbyshire. Fingers crossed for more peeks into her imagination, as well as chats on her couch about self-care, creativity, and being yourself. And definitely more hauls that make me stop whatever I’m writing, and order a cat dress from Lazy Oafs that I didn’t know I needed.