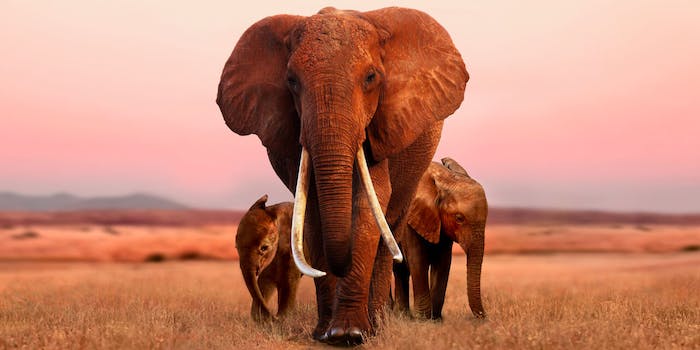 The brilliantly shot film refuses to point the finger at humanity.

“It reminds us of how it once was when the whole of Africa was theirs.”

This line, spoken at the end of The Elephant Queen by narrator Chiwetel Ejiofor, deserves more consideration throughout the documentary film, which debuts on Apple TV+ this Friday. Instead of engaging with the larger problems facing all species on Earth, the film opts for a limited, even myopic look at nature. While this choice leads to compelling moments, it also cripples The Elephant Queen overall, resulting in a series of lovely images and thoughts without a message to back them up.

There is much to admire about The Elephant Queen. The film follows the matriarch of an elephant family, Athena, as she searches for water and tries to keep her family together. Beautiful photography captures the elephants’ beauty and grandeur. The dedication of the crew is evident, as the documentary presents a slew of moving moments that must have required months to capture. The filmmaking also asserts a point of view, helping us to identify with the struggle of a small herd facing big problems.

Every animal shown here, great or small, fits into a larger whole. Each animal struggles for survival, and we empathize with them.

The immediacy and detail with which The Elephant Queen presents these struggles makes one of its narrative choices particularly strange. Though the film amply discusses how animals impact one another, it has almost no discussion of  human impact on animals. This decision holds the film back from being more than a brilliantly photographed nature documentary. The omission is especially glaring because much of Athena’s struggle involves finding enough water for her family amid a drought. The heat, we’re told, is unexpectedly harsh, but the film spends little time explaining why.

It is difficult to discern who exactly The Elephant Queen is for. This is definitely a family film, but the line for what is age-appropriate is puzzling at times. When animals are clearly engaging in orgiastic sex, Ejiofor says they are “hugging,” yet the film also includes a long, melancholy scene in which elephants reflect on the skull of a lost member of their herd. The filmmakers seem unsure whether they are presenting an unflinching look at the realities of animal life or a glossy, kid-friendly introduction to the world of these beautiful beasts.

Again, this limited point of view is most disappointing in how the film handles human interaction with animals. It rarely mentions the danger that humanity presents until a credit sequence announces a poacher killed Satao, the largest and proudest elephant.

Not every film needs to derail its central purpose to discuss humans’ ecological footprint, but here it seems especially relevant. The powerful images are somewhat undermined by the narrative decision to protect the audience, creating a false image of a pocket of the world that humanity hasn’t touched. At moments, the film gets so myopic, it feels like an intentional betrayal.

“It would seem the worst time to be born,” Ejiofor remarks at one point. What a powerful thing to say. It would have been more powerful to note that the reason it is difficult for these creatures to be brought into the world right now is because of us.