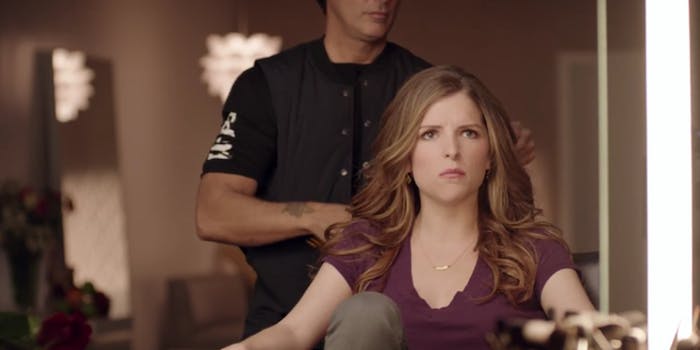 ‘Tis the season for all the Super Bowl ads marketed to pluck your heartstrings and make you buy beer. Perhaps the most innovative marketing campaign comes via Newcastle, whose IfWeMadeIt.com hosts several trailers for the “Mega Huge Football Game Ad” they “almost made,” including this spot featuring America’s Sweetheart, Anna Kendrick.

Touted as a “behind the scenes” look at the commercial they were supposed to make, Kendrick explains why the promotion failed, and questions why she was even asked to be in the commercial.

“I don’t think of myself as beer commercial babe hot,” she says. “I mean, I’m hot. But like approachable hot. Like, the-hottest-girl-in-your-improv-class hot.”

There’s also a lot of swearing.

Newcastle’s YouTube page features several more failed spots, including one with former NFL star Keyshawn Johnson, in which he explains they wanted him to be the voice of a CGI skateboard cat, and an of out-of-context stock footage montage that makes fun of beer commercials. On the IfWeMadeIt site, there’s a “coming soon” preview featuring cartoon cats wearing sunglasses and riding skateboards.