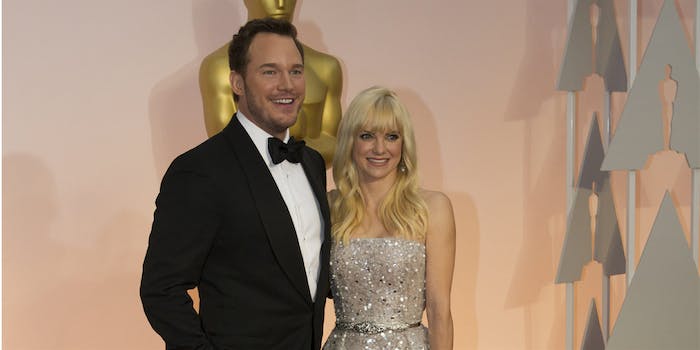 'It’s hurtful and also embarrassing when people are saying your husband is cheating on you, even if it’s patently untrue.'

Anna Faris said that she felt insecure reading “false rumors” about an affair between Chris Pratt and Jennifer Lawrence, she revealed in her new book Unqualified.

Faris and Pratt split up in August, but Faris described what was going through her mind when rumors of her husband’s alleged infidelity started brewing. According to Faris, before Pratt and Lawrence had met and started filming Passengers, her publicist told her that the paparazzi would be following their every move. The publicist wanted Faris to “brace herself” for the inevitable reports of an affair between the co-stars.

With Pratt’s career taking off in the past few years, Faris saw him work with other television and movie stars without any issue. But when rumors of an affair between Pratt and Lawrence inevitably did appear, Faris still felt hurt and embarrassed by them. And Faris didn’t blame Lawrence one bit for it.

“Jennifer and I are really friendly, and she was apologetic even though she didn’t need to be, because she hadn’t done anything wrong,” Faris wrote. “She’s awesome, but of course it’s hurtful and also embarrassing when people are saying your husband is cheating on you, even if it’s patently untrue. You still feel, and look, like a fool.”