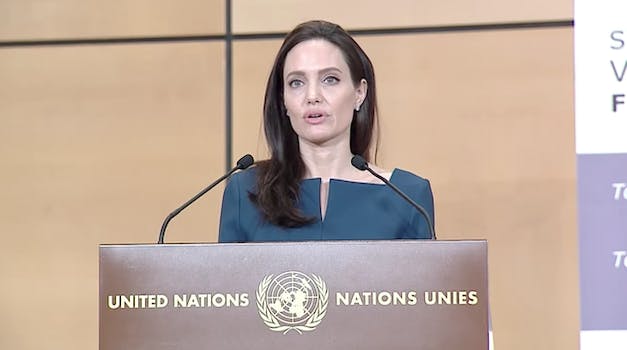 Jolie wanted to find a young lead who had experience with trauma.

The September cover story of Vanity Fair provides readers with a comprehensive timeline of Angelina Jolie’s relationship with fame, privilege, and her passion for activism, which spurred after she filmed Tomb Raider in Cambodia. She would later adopt her first son, Maddox, from an orphanage there. Her latest project is a combination of the story of activist Loung Ung and a history of Cambodia’s genocide, which seems to bring her worlds of Hollywood and activism into one space.

The article is overall a gentle exploration of Jolie and her life from her start as a reckless young actress, to the dedicated and well-cultured woman and mother she is today. But one paragraph in this whole article stands out from the rest. It details a game that Jolie played with children in Cambodia while trying to cast a young Loung Ung for her upcoming film.

If something about that process feels cruel and wrong, you’re not the only one who thinks so.

Angelina Jolie is crazy. What a cruel psychological game to play with impoverished children. pic.twitter.com/iAEUhINBui

angelina jolie really played a psychological game w/ impoverished kids instead of, you know, just having them audition like a normal person

This 'casting game' Angelina Jolie subjected impoverish children to is monstrous and should not go unnoticed. pic.twitter.com/k5F2T6Ukkk

The insufficient explanation for why this method was used is that Jolie wanted to find a young lead who had experience with trauma. Jolie’s critics are pointing out that no matter how active she is in the global community, she still operates will a level of power that can be used to take advantage of people.