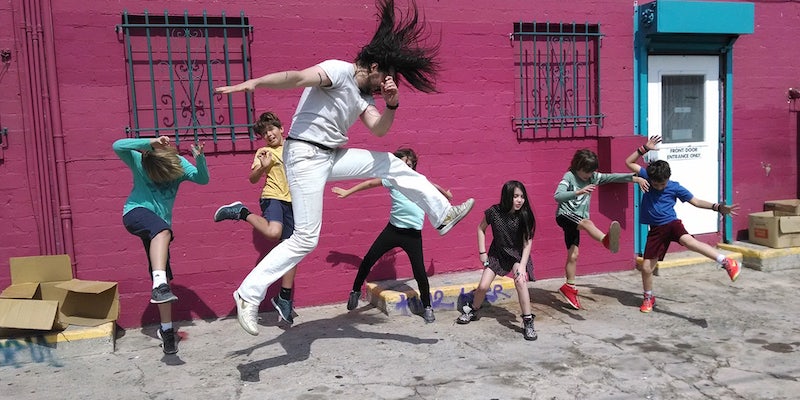 Andrew W.K. wants to party hard with your kids

Meet Me at the Reck bills itself as "Sesame Street for the digital generation."

It may seem like an odd gig for man most famous for his bloody-nosed album art and “Party Hard” mantras. But Disney-owned Maker Studios is rolling the dice with the manic musician and putting him at the center of a new six-part family series called Meet Me at the Reck, which premieres on Maker.tv on Saturday, Oct. 4.

In the series, which was filmed at a neighborhood rec center in the Echo Park section of Los Angeles, a group of children will accompany W.K. and a diverse array of special guests as they explore creative ways to use their imaginations. Among those slated to appear on the series are comedian Jack Black, YouTube stars Joseph Garrett (Stampylonghead) and Mary Gutfleisch (Mary Doodles), pro skateboarder Eric Koston, and NASA scientist Michael Meacham.

You can watch a trailer for the series below, which ambitiously declares itself to be “Sesame Street for the digital generation.”

This actually isn’t Andrew W.K.’s first foray into children’s television; he also hosted Cartoon Network’s Destroy Build Destroy from 2009 to 2011. That show’s theme of blowing things up seemed better suited to W.K.’s over-the-top, rock ’n’ roll persona. But despite being acquired by the Walt Disney Company earlier this year, Maker Studios has continued to produce edgy yet kid-friendly content like Epic Rap Battles of History, so maybe Mr. Party Hard will fit right in on Maker.tv.

“Hosting Meet Me at the Reck was so much fun for me,” W.K. said via a press release. “It’s a very advanced party time with some very advanced party friends!” See? Kids know how to party, too. They just (hopefully) don’t have to bloody their faces to do it.