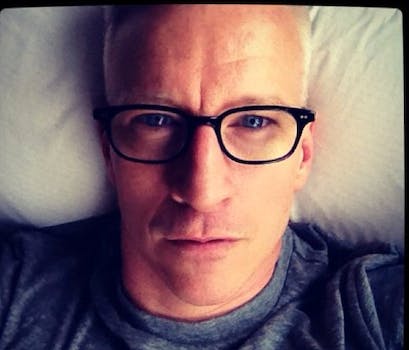 Anderson Cooper rings in 2013 with a sassy Twitter slamdown

Be careful what you tweet at Anderson Cooper. You may regret it.

It’s well-known that you shouldn’t mess with Anderson Cooper on Twitter, but apparently some of us haven’t gotten the memo.

Twitter user Natasha Markakis ruffled the CNN anchor’s silver feathers after calling his New Year’s Eve cohost Kathy Griffin “trash.” Markakis offered an olive branch to  Cooper himself, calling him a “spectacular news reporter.” But the damage had been done.

Cooper lashed back and defended Griffin—one of his closest friends. Markakis, who does press relations for Victoria’s Secret, found her job in crosshairs of Cooper’s sassy barb.

“you do pr for Victoria secret and you are daring to call other people “trash?,” replied Cooper. “Sweetie, seriously.”

Seriously. Cooper’s jab was retweeted 800 times and earned him 1,200 favorites. 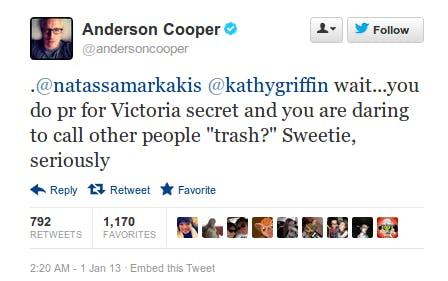 Markakis didn’t reply to Cooper but retweeted one of her friends defending her: “as much as I admire you I don’t respect you belittling someone’s perfectly dignified job…”

In November, Cooper’s sass-powered insult deflection shield was deployed when a viewer slammed his reporting in Gaza City. He dug deep through the insult-hurler’s Twitter feed to concoct an insult about her flan recipes. That was retweeted and faved 3,000 times.

For the past six years, Cooper and comedian Griffin have been hosting CNN’s yearly New Year’s Eve celebration that consists mostly of Cooper laughing nervously as Griffin badgers him with jokes. The campy countdown show has brought high ratings for the struggling network.