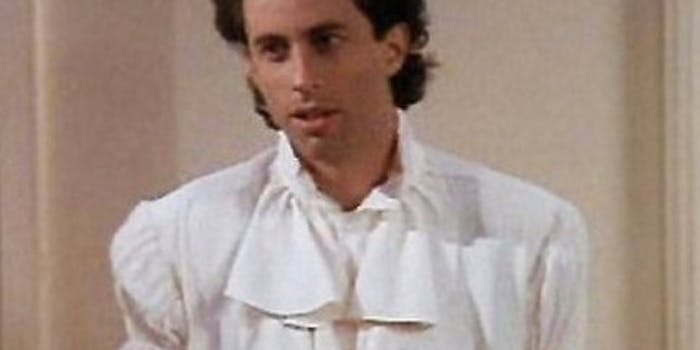 What’s the deal with “Ancient Seinfeld”?

The times change, but George Constanza's inability to get himself together stays the same.

Throughout December, Seinfeld fans on Twitter have been tickled to the tune of Modern Seinfeld, a Twitter account run by two New Yorkers that puts the cast of comedian Jerry Seinfeld’s iconic 1990s sitcom show under the lights of the modern world.

But the popular parody account isn’t the only Twitter feed to fit Seinfeld’s exploits into a different era. Shortly after Jack Moore and Josh Gondelman’s Modern Seinfeld popped up, a new account opened in its same image.

The account is called Ancient Seinfeld, and it’s bringing many of the same laughs in a nearly prehistoric manner.

“My feed is anti-pop,” Matt Grasso, the screenwriter in New York who created Ancient Seinfeld, told the Daily Dot. “There’s nothing hip or trendy about it. Riddled with historical references, it’s a little more difficult for people to grasp. However, only on Ancient Seinfeld would Kramer and Newman drink pheasant blood in hope of becoming immortal. That’s the Seinfeld world I want to live in.”

Which is all basically to say that the settings may change, but the sequences will forever remain the same.

“George could barely cope in 1996! He’s not equipped to handle any era, but it’s a lot of fun watching him try. In Ancient Seinfeld, he’s been auctioned off as a slave but no one bids on him; he’s gone blind from eating strange berries; he’s become King of the Moops only to discover that there are no Moops.”

That’s something we’ve seen with Modern Seinfeld, as well: among other traits that foil the fab four, George can never quite handle his business. Grasso said the big difference between the two feeds is the fact that Ancient Seinfeld doesn’t have the wonders of pop culture on his side.

“I’m limited in the guest stars that I use,” he said. “While Modern Seinfeld gets the Malin Akermans and Rachel Bilsons of the world, I’m stuck with folks like Jesus, Mary Magdalene, and Attila the Hun.

“I also can’t get the ‘Kramer uses FaceTime?! So do I!’ response from my audience. We can take a standard Seinfeld plot and include words like Pinterest and Instagram and voila, we have Modern Seinfeld. I think it’s a comment on society today that technology has become more important than relationships.

“George is going to mess things up with his girlfriend no matter whether he can program his DVR or not.”

That applies to all eras of women, even the ones George and Jerry used to compare rather apathetically to Helen of Troy.