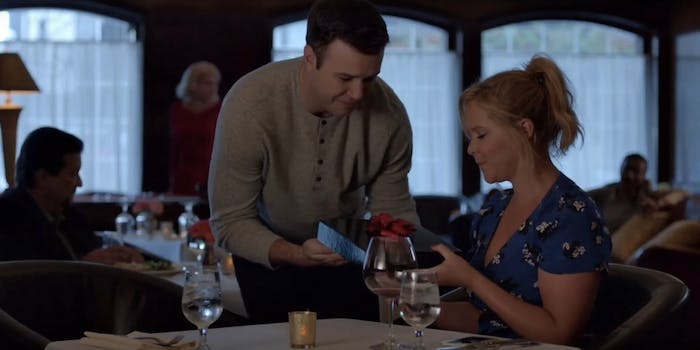 Amy Schumer spoofs our nation’s obsession with guns on ‘SNL’

'From first loves to new beginnings—and wherever life takes you—guns are there.'

Sure, Amy Schumer was cracking jokes about the Kardashians while hosting Saturday Night Live last night, but she also aimed her comedy at one of the biggest issues that the U.S. just can’t fucking figure out: ending gun violence.

In a sketch simply titled “Guns,” Schumer and the rest of the SNL cast display some of life’s most precious moments—getting a gift from your significant other, spending time with grandpa, the birth of a newborn baby. Occasions big or small, guns are there.

This isn’t the first time that the comedian has addressed mass shootings and U.S. gun policies. In August, following a movie-theater shooting during a screening of her movie Trainwreck that killed three people, Schumer and Sen. Chuck Schumer unveiled a plan to stop these violent events. According to website shootingtracker.com, there’s been over 300 mass shootings during 2015 in the United States, as of the month of October.

Schumer has used her comedy in the past to point out some of society’s most prevalent issues. A sketch from her show Inside Amy Schumer spoofed Friday Night Lights while making jokes about rape culture.

The rest of Schumer’s SNL appearance was lighter. Her monologue included stories about meeting Bradley Cooper (who she’s totally dating now, according to Facebook) and Hillary Clinton. She asked the presidential candidate about her favorite booze, and sounded a little disappointed when she found out Clinton isn’t down for tequila.